The House of the Seven Gables

Another stop I made while spending the day in Salem was The House of the Seven Gables.

Some of you may recognize this name.  In 1851 Nathaniel Hawthorne wrote and published a novel with the same title.  The house was built by John Turner, a Salem sea captain, in 1668.  Three generations of the Turner’s lived in the home.  In 1782, Captain Samuel Ingersoll purchased the home when John Turner III lost the family fortune.  He made renovations to the home that included removing some of the gables.  When he died, the house transferred to his daughter Susanna.  She was cousin to Nathaniel Hawthorne.  Actually, Hawthorne never lived in the house.  However, he visited Susanna and listened to her stories about the house and that inspired him to use the home as a setting for his novel.  Also, the house he visited only had three gables.  However, Susanna told Hawthorne about the seven gables and related the house’s history.

Caroline Emmerton bought the home in 1908. Emmerton came from a wealthy family and she inherited a large sum from John Bertram, her grandfather.  She set out to continue the family tradition of supporting charities.  Some of these included the Salem Public Library, the Salem Fraternity Boys Club, the Seaman’s Widow and Orphan Society, the Family Service Association, and the Society for the Preservation of New England Antiquities.   During the years 1908-1910 she restored the home with the intention of opening it up as a museum and to help preserve the home for future generations.  Another purpose was to charge a fee to tour the home to support the House of Seven Gables Settlement Association.  She worked with Joseph Everett Chandler, a Boston architect, to restore the home.  During the restoration process, more attention was placed on attracting visitors than on historical accuracy.  In their defense though, this was a common approach in the early twentieth century. The gables were rebuilt.   A “cent-shop” was added to the home as well.  This was never a part of the Turner-Ingersoll home, however in Hawthorne’s novel, Hepzibah Pyncheon operates one out of the home.  Emmerton also added a secret staircase to the attic.  Our tour guide said this was inspired by Clifford Pyncheon, one of the characters in the novel who skulks around the home.  However, several features of the home are in their original form, such as beams, rafters, and the Georgian paneling.

The house is quite lovely and has great views. 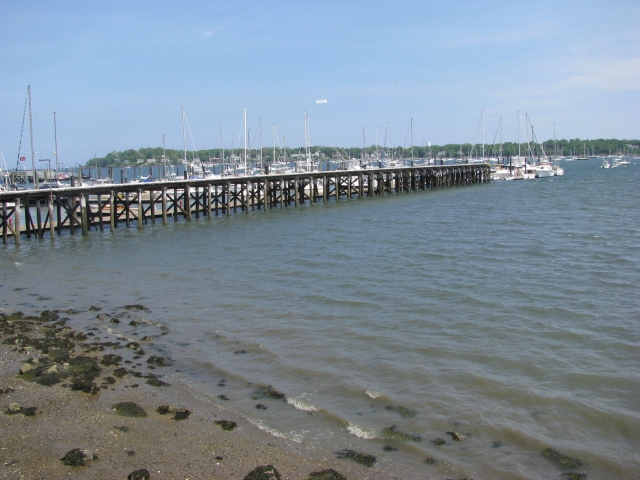 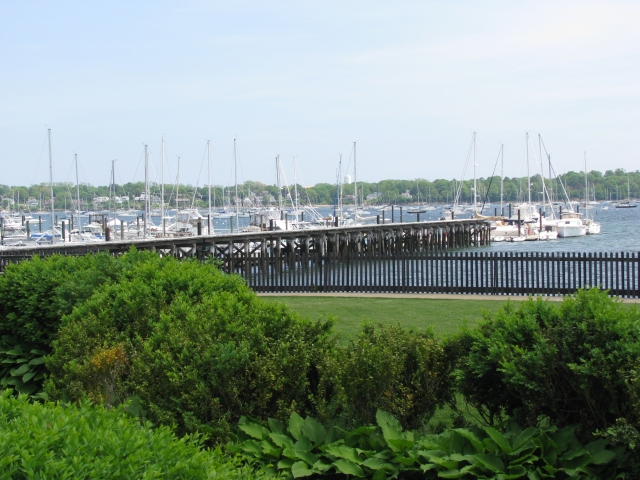 But I find it humorous that the reason this home was saved was because Hawthorne was inspired to write his novel and use this home for the setting.  When I stood on the grounds though, I was grateful.  And it is inspiring to know that novels can have such a power.

Also on the grounds is the Nathaniel Hawthorne Birthplace.

The house was not always right next door.  It is the actual home of the author, but it was moved to this spot.  Originally it was on Union Street, which is a few blocks away.  This part of the tour was self-guided.  Previously I had visited these homes during the off season (either October or November) and our guide actually took us through his birth home and gave us insight into his life.  I’m not sure if this has changed permanently or due to large tour groups (ours was very large and cumbersome) and the steady flow of tours during the busy season they have determined that they don’t have the ability to guide you through the birthplace. Both of us were disappointed by this, especially since another group finished right after us and we didn’t get much time in his home.  There were ladies present to answer questions, but it was so crowded and hot and we had been there before we went on our way.  If you do plan on visiting the home I wouldn’t suggest going on a holiday weekend.

TB Markinson is an American who's recently returned to the US after a seven-year stint in the UK and Ireland. When she isn't writing, she's traveling the world, watching sports on the telly, visiting pubs in New England, or reading. Not necessarily in that order. Her novels have hit Amazon bestseller lists for lesbian fiction and lesbian romance. She cohosts the Lesbians Who Write Podcast (lesbianswhowrite.com) with Clare Lydon. TB also runs I Heart Lesfic (iheartlesfic.com), a place for authors and fans of lesfic to come together to celebrate lesbian fiction.
View all posts by TBM →
This entry was posted in Books, Travel, Travel Photos, Writers and tagged American history, American Literature, American Writers, Architecture, Caroline Emmerton, Clifford Pyncheon, Gables, Hepzibah Pyncheon, John Turner, John Turner III, Joseph Everett Chandler, Massachusetts, Nathaniel Hawthorne, Salem, Samuel Ingersoll, Susanna Ingersoll, The House of the Seven Gables. Bookmark the permalink.

10 Responses to The House of the Seven Gables