Two for the price of one!

The original Fordham began in 1703 in Annapolis.  In 1995, it was brought back to life once again in Annapolis.  However, its popularity became more than it could handle for the small brewery.  Fordham found a new home in Dover, Delaware so it could provide more beer to the public.  According to our tour guide, the new location did not change the quality of the beer since the recipes and core beliefs moved to Dover as well.

This Dover location also became the new home for another brewery, Old Dominion.  The founder of Old Dominion, Jerry Bailey, became interested in brewing in 1978, when someone gave him a brew kit.  The idea behind Old Dominion started to ferment in Bailey’s mind.  In 1989 he opened Old Dominion Brewing Company in the DC area.  The popularity and success started to grow.  Fortune Magazine, in 1995, listed Jerry’s baby as “One of the 50 best breweries in the US.”  In 2007, Bill Muehlhauser took over the company.  The brewery stayed in the same location for the next couple of years.  However, the company experienced the same fate at Fordham and outgrew its original location.  It also ended up moving to Dover so it could increase its output without risking the quality.

Now that the history is out of the way, let’s get to the good stuff: The Beer!

For a small fee, $5, you can tour the brewery with a guide, sample 5 beers, and as a parting gift you receive a pint glass.  While I tried several different beers the best by far was the Oak Barrel Stout.

In fact I enjoyed this beer so much I used two of my tokens for this tasty treat.  The Delaware News Journal, in March 2011, named this the “Best Beer in Delaware.” 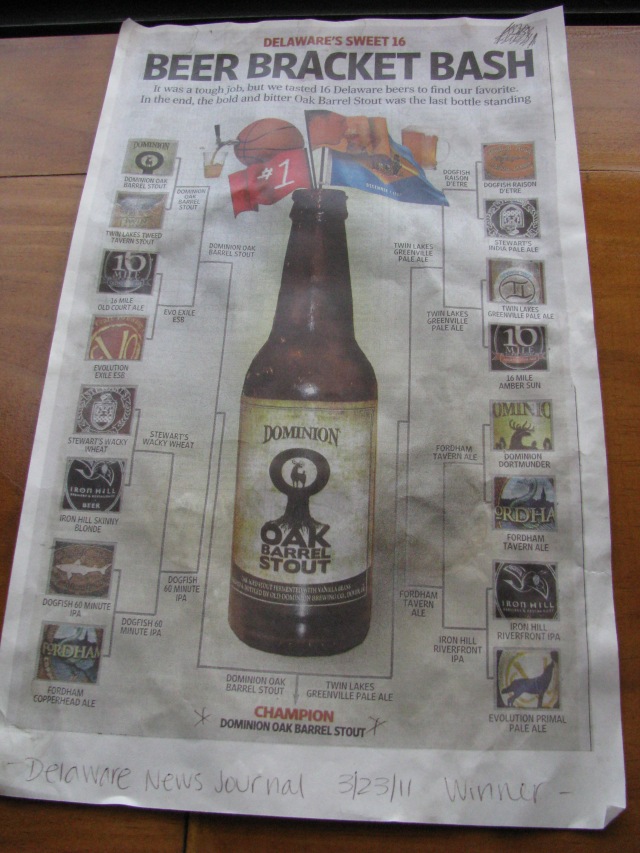 The beer wasn’t the only good thing about this tour.  Our guide was great.

She was informative, friendly, and extremely helpful.  When I told her I was a history person she suggested a plantation for me to swing by before my next brewery stop.  She went above and beyond by looking up the address and looking into their tour schedule for me.  Unfortunately, once we got to the car we realized we wouldn’t have time to fit it in.  But I really appreciated her tip and I will keep that in mind for the next time I find myself in Delaware.

If you like beer, friendly people, and did I mention beer, I would highly recommend these breweries.  It was one of the best beer tours I’ve done.

But it was time to move on.

Up next: Twin Lakes Brewing Company