Second Group Read Discussion on The Way of Kings 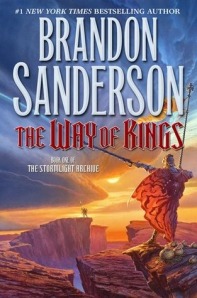 It is time for the second group discussion on The Way of Kings, by Brandon Sanderson.  This discussion focuses on the second book in the novel.  Please note that there will be spoilers in this post and probably in the comments as well.

This group read is hosted by Polishing Mud Balls and all of the discussions can be found here.  The questions for this week were provided by Carl.

1.  In a recent interview Brandon Sanderson mentioned that the interludes are meant to show us parts of the larger world since much of the action is focused in one or two places.  What do you think of the first two sets of interludes?  Any characters or situations stand out to you?

I’ve enjoyed the interludes, however, one of my favorite characters is Szeth and I’m a little bummed that he only shows up in the interludes and the prologue.  I’m fascinated by him.  Part of him seems peaceful to me.  But he is also an exceptional and gifted killer.  I’m having a difficult time figuring him out.

Now that I’ve aired my complaint, I do think that the interludes help me understand the bigger picture.  They remind me a little of The Grapes of Wrath.  Steinbeck had interchapters that focused on the land, the economy, and the social implications of the Dust Bowl and Great Depression and how these factors were causing devastation for his characters in the novel.  I’m enjoying how Sanderson is focusing on certain characters, but he hasn’t forgotten the larger picture and how it matters to explain the how and why for his story.

In the second interlude he introduced Axies and he seems like another fascinating character who I would like to learn more about.  I would like to know why he is trying to discover different types of spren.  Is he trying to collect them for fun, to learn, or to gain power?

2.  In small increments Brandon Sanderson is revealing the geology and ecology of Roshar.  What are your thoughts on what has been revealed thus far?

I’m surprised by the focus on geology and ecology and this is due to my ignorance.  I haven’t read a lot of science fiction and fantasy novels.  This is my second group read.  The first was Dune which focused a lot on environmental factors and now this novel also includes a lot as well.  I’m passionate about the environment.  These novels are making me a fan of these two genres and I would like to explore them more.  (Carl this is your cue to add more books to my reading list :))

I’m fascinated by the highstorms.  Also I’m curious about the creatures that roam the land.  He is creating a world that is highly evolved.  And I think everything that he is creating will play a vital role in the series.  I love how the environment is becoming a major player in the story.

3.  This second section of The Way of Kings featured two distinct story lines, those of Dalinar and of Kaladin.  How do you feel this section of the book compares with the first section and what are your thoughts on either or both of these story lines?

At first I was a little confused since the first section concentrated on Shallan and Kaladin.  I wondered what happened to her.  But Sanderson is tying all of the characters together beautifully.  I’m liking that Jasnah is the king’s sister and Dalinar is their uncle.  Also the chapters on Dalinar are introducing some of the key players in the war and I’m loving the power struggles that are going on with the highprinces.  I love politics and I enjoy political struggles, the back stabbing, and the intrigue.  I don’t like it in real life (even though it is always prevalent), but it is fun in fiction.

For me it seems too early in the book to compare the first two parts.  I know we have read a decent chunk of the book, but it still feels too soon to decide which I like best.  I feel like there is still so much to discover and to understand how and why he brought us to certain characters.  Even though this book is a mammoth of a book, I don’t feel that Sanderson wastes words or description.  Everything seems planned and important.

4.  In the interview set out earlier in the week Sanderson talked about the Stormlight Archive being a series about the return of magic.  What are your thoughts on this, particularly in relation to the visions Dalinar is having during the highstorms?

The visions are intriguing.  Since they are related through Dalinar’s perspective I feel that the reader takes them as true happenings even though everyone thinks that he’s going crazy.  There are times when I get frustrated that Dalinar follows the advice from his visions.  What if the visions are wrong?

Magic is a fun aspect to this book.  Wouldn’t it be fun if people in today’s world believed in magic?

5.  There has been a change in this second section of the nature of the quotes prior to the beginning of each chapter.  What are your thoughts on the opening lines featured in both sections of the book to this point?

The quotes add an extra element to each chapter.  When I read them I try to see where the author is taking me.  They offer a hint, but it isn’t completely clear.  I feel like Sanderson wants us to solve a riddle and it is a fun aspect to the novel for me.

6. In the questions for these first two sections we’ve talked about characters and the story lines and the world that Sanderson has created, but there are a lot of interesting flourishes and touches to The Way of Kings thus far (shardplate, spren, the actual Way of Kings book, highstorms, etc.).  Talk about some of the non-character/non-setting things that you are finding either fascinating or annoying (or both) in the book thus far.

The spren are fascinating characters.  If it wasn’t for the evolution of Syl though, I think I would find the spren annoying.  However, I am curious as to why Syl is starting to think, feel, and figure things out.  What makes her different from the other spren and why?  And can the others learn?

I would love to see one of the highstorms since they sound like a fierce act of nature.  Also, considering this year many people in today’s world have been impacted by nature, such as earthquakes and tornadoes, I’m loving how Sanderson is including the environment in the story.  The environment is an important factor in all of our lives, even if we aren’t always cognizant of it.  I appreciate that Sanderson is aware of this and is giving the environment respect.

And what is the connection between the highstorms and Dalinar’s visions?  Are they connected to the Way of Kings book?  Is the book magical?

I’m looking forward to another great week of discussions.  Last week was awesome and I’m really enjoying getting to know other book lovers and to hear their ideas.  Thanks everyone!

TB Markinson is an American who's recently returned to the US after a seven-year stint in the UK and Ireland. When she isn't writing, she's traveling the world, watching sports on the telly, visiting pubs in New England, or reading. Not necessarily in that order. Her novels have hit Amazon bestseller lists for lesbian fiction and lesbian romance. She cohosts the Lesbians Who Write Podcast (lesbianswhowrite.com) with Clare Lydon. TB also runs I Heart Lesfic (iheartlesfic.com), a place for authors and fans of lesfic to come together to celebrate lesbian fiction.
View all posts by TBM →
This entry was posted in Books and tagged Book Clubs, Book Discussions, Brandon Sanderson, Fantasy, Fantasy Novels, Group Read, Literature, Polishing Mud Balls, Science Fiction, Stainless Steel Droppings, The Way of Kings. Bookmark the permalink.