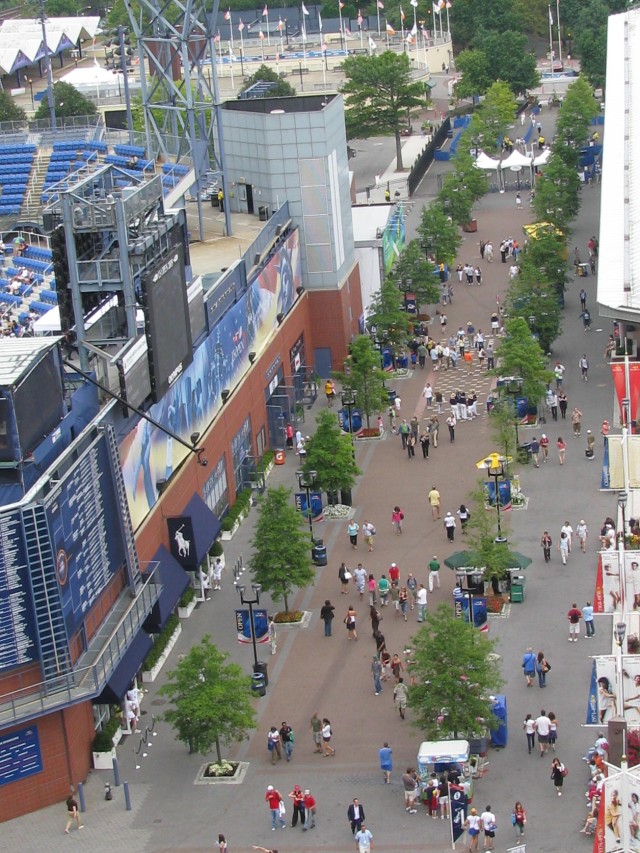 Since the Australian Open starts today, I decided to post a photo from the US Open at Flushing Meadows in Queens, New York.  I haven’t been to the Australian Open, but I hope to attend a match or two in the future.   This photo was taken from the top of Arthur Ashe Stadium.

Today also marks Martin Luther King’s birthday back home in the US.  Arthur Ashe, was an African-American tennis player from Richmond, Virginia.  He is an example of some success from the American Civil Rights Movement.  This isn’t to say that the issue is resolved and I think that is one reason to celebrate King’s birthday.  It is a way to remind ourselves that more can be accomplished, while also celebrating the achievements that King helped bring to fruition.

TB Markinson is an American who's recently returned to the US after a seven-year stint in the UK and Ireland. When she isn't writing, she's traveling the world, watching sports on the telly, visiting pubs in New England, or reading. Not necessarily in that order. Her novels have hit Amazon bestseller lists for lesbian fiction and lesbian romance. She cohosts the Lesbians Who Write Podcast (lesbianswhowrite.com) with Clare Lydon. TB also runs I Heart Lesfic (iheartlesfic.com), a place for authors and fans of lesfic to come together to celebrate lesbian fiction.
View all posts by TBM →
This entry was posted in Sports, Travel, Travel Photos and tagged American Civil Rights Movement, American history, Arthur Ashe Stadium, Flushing Meadows, Martin Luther King, New York, New York City, Photography, Queens, Sports, Tennis, Tennis Grand Slams, Travel Blog, Travel Journal, Travel Photo. Bookmark the permalink.