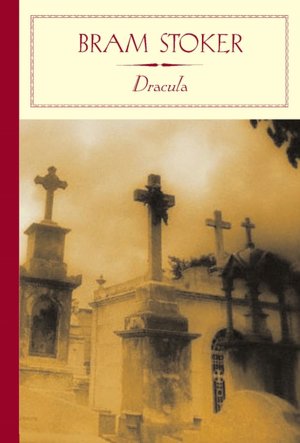 Some of you may remember that I read Dracula last summer.  A fellow blogger, Cheratomo, and I decided to read this book together and we wanted to post our reviews together.  Originally we planned on posting the reviews late summer/early fall.  But things didn’t go according to plan. First she went to Germany for a vacation.  Then I moved to London.  Then she started college and ended up getting pretty sick.  Before we knew it, the holidays were upon us.  Well here we are, the first month of 2012 and now both of us are ready to post our reviews.  That is what I call persistence.

Abraham “Bram” Stoker (Nov. 8, 1847-April 20, 1912) was an Irish writer. Most of us in today’s world know him for his novel Dracula.  However, during his day, he was better known as the personal assistant of the actor Henry Irving.  I had to look up this Irving chap.  As it turns out, he was the most famous actor of the time.  They met in 1876 and became friends.  During the years 1878 until the actor’s death in 1905, Stoker’s primary job was as Irving’s assistant.  I find it ironic that Irving was so popular during his day and I didn’t know anything about him.  But I knew about his secretary.  Life is funny sometimes.

During Stoker’s childhood he was sickly.  In fact, he was bed-ridden until he was seven.  After this, he made a complete recovery and during his time at Trinity College, Dublin, he was a champion athlete.  During his illness as a child, he spent many hours reading.  Recently I learned that Robert Louis Stevenson, the author of The Strange Case of Dr. Jekyll and Mr. Hyde, was also frequently ill during his childhood.  I wonder if Stephen King also had a childhood illness, but I am getting off topic.

Bram Stoker wrote many novels, but most people today only remember one, Dracula.  He published this novel in 1897.  From the time it was printed until today this work has been a success.  Also, many film versions of the novel have been made.

When I set out to read this, I was only familiar with the movies.  I selected the book since I was participating in a Gothic Reading Challenge and it was on my 1001 list of books.  I wanted to kill two birds with one stone.  What I didn’t expect was that I would love this novel.  As soon as I settled into the novel and started reading the pages from Jonathan Harker’s journal I was hooked.  Each page brought more drama, anticipation, excitement and horror.  I could feel his terror.  And then boom, Stoker switches gears and includes letters between Mina Murray, Harker’s fiancée, and Lucy Westerna.  Then he includes parts from Dr. Seward’s diary about his unusual patient Renfield.  Eventually, Stoker connects all of these characters in a quest to eradicate the evil Dracula and his plot to create an army of Un-Dead.  An army of Un-Dead—that’s some pretty terrifying stuff.   What I loved was that Stoker used journals, letters, news articles and diaries to let the reader feel like he or she is piecing together the story.  As someone who loves history, the style worked for me completely.  I felt like I was tracking down primary sources to find out what really happened.  His format kept adding new layers of anticipation and fear.

Dracula is without a doubt one of the scariest creatures I’ve encountered in my readings.  I remember several times when I was reading this I would jump at the slightest sound.  Once while I was walking my dog around the reservoir near my home in the early morning hours, I thought I was a goner when a sudden mist appeared around a bend.  This novel put me on edge.  It scared me.  It made me wonder if vampires could exist.  For people who loved to be scared, this is a must read.  If you love a good mystery, this is the right novel.  I cannot recommend this novel enough.  Please just read it!

TB Markinson is an American who's recently returned to the US after a seven-year stint in the UK and Ireland. When she isn't writing, she's traveling the world, watching sports on the telly, visiting pubs in New England, or reading. Not necessarily in that order. Her novels have hit Amazon bestseller lists for lesbian fiction and lesbian romance. She cohosts the Lesbians Who Write Podcast (lesbianswhowrite.com) with Clare Lydon. TB also runs I Heart Lesfic (iheartlesfic.com), a place for authors and fans of lesfic to come together to celebrate lesbian fiction.
View all posts by TBM →
This entry was posted in Books and tagged Book Reviews, Bram Stoker, Dracula, Gothic Literature, Henry Irving, Irish Authors, Literature, Robert Louis Stevenson, Stephen King. Bookmark the permalink.

38 Responses to Dracula by Bram Stoker