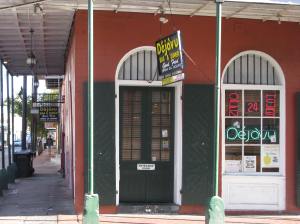 No matter how hard you try to plan trips so there won’t be any surprises, sometimes life has other plans for you.  Without going into too much detail, this happened to us and that was how I ended up going to New Orleans by myself for a few days.  At first I was a bit hesitant.   My first day didn’t start with much promise since when I woke up it was pouring rain outside.  I was hoping to walk around and snap some photos of the beautiful architecture and soak in the ambience of the city.  The rain delayed my walk.  And the wind after the rain stopped sent me shivering into a place called Déjà Vu.  No tables were open so I grabbed a seat at the bar.

Not too long after, the front door swung open and a guy shouted, “I brought Frenchy.”  I turned briefly and saw two drunk chaps stagger to the bar and take the seats next to me.  One of the guys, Frenchy, was much older than the other guy.  I tried not to take much notice since all I wanted to do was warm up and grab a bite before hitting the streets again.  The bartender seemed to know the pair quite well and further into their conversation I started to pick up some interesting tidbits.

Frenchy asked the woman behind the bar if she read his book.  This piqued my curiosity.  New Orleans has a knack for collecting writers.  Who was this guy?  The waitress responded that she was worried that movie makers would take advantage of him and his story.  The bartender explained that Frenchy was well-known as Mr. New Orleans and that even out-of-towners asked about Mr. New Orleans.

I had never heard of Mr. New Orleans.  But I jotted down some notes to look him up when I got back to my hotel.  I found out that I had lunch with a mobster, named Frenchy Brouillette.  Now is this man really a mobster.  That is a hard question to answer, however, he has written a book about his life, Mr. New Orleans: The Life of a Big Easy Underworld Legend.  Read it and decide if you believe he is a mobster.  I haven’t read the book yet.  As for myself, I will forever tell people that I ate lunch with the famous Mr. New Orleans.

TB Markinson is an American who's recently returned to the US after a seven-year stint in the UK and Ireland. When she isn't writing, she's traveling the world, watching sports on the telly, visiting pubs in New England, or reading. Not necessarily in that order. Her novels have hit Amazon bestseller lists for lesbian fiction and lesbian romance. She cohosts the Lesbians Who Write Podcast (lesbianswhowrite.com) with Clare Lydon. TB also runs I Heart Lesfic (iheartlesfic.com), a place for authors and fans of lesfic to come together to celebrate lesbian fiction.
View all posts by TBM →
This entry was posted in Travel Stories and tagged Frenchy Brouillette, Mobsters, Mr. New Orleans, New Orleans, Travel, Travel Stories, Vacation Planning, Vacations. Bookmark the permalink.