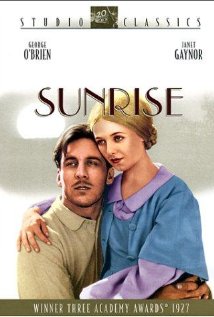 The next movie on my journey to watch all the top 100 AFI films from 100 to 1 is the 1927 silent film, Sunrise.  F. W. Murnau directed this film.  I haven’t watched too many silent films in the past.  When I popped the Sunrise DVD into the player and hit play I felt silly.  I knew that it was a silent film.  However, when the credits started there was no sound.  I grabbed the remote to turn the sound up.  Then I had to laugh at myself.  It was just an instinct to turn it up.  I’m so used to sound.  The first minute or so are completely silent.  Afterwards, there is music adding to the mood and tension of the film.

The movie Sunrise is based on the short story, Trip to Tilsit, by Hermann Sudermann.  When the movie starts you meet a man (George O’Brien), who is a local farmer.  He’s married to a woman (Janet Gaynor).  At first their marriage is happy and they have a child together.  Then the farmer falls for a seductive woman from the city (Margaret Livingston).  She convinces the farmer to move to the city with her since it is an exciting place to be.  However, the man asks what he should do with his wife.  How can he just leave her?  The mistress says, “Couldn’t she just…drown?”  The man agrees that this is the best method.  The next day, the husband plots to take his wife out in a boat and then fake an accident.  He brings some bushes to help him stay afloat after he capsizes the boat.  The wife figures out the plan and is terrified.  Seeing her face and her fears changes his mind.  He can’t go through with it.  But now, can the wife forgive her husband for attempting to kill her.  Or for even thinking about it?

Many regard this to be one of the best silent films ever made.  Since I haven’t seen too many, I can’t back up this claim.  What I can say is that I thoroughly enjoyed the movie.  I loved the special touches the director used.  For instance, when the mistress says that the man should drown the wife, the words on the screen (remember it is a silent film and there are subtitles) slowly disappear like they are drowning.    The movie won Oscars for Best Actress for Janet Gaynor, Best Cinematography, and Best Picture.

This was the second film by F. W. Murnau that I’ve seen.  And even though I really enjoyed this film, I have to say I enjoyed his movie Nosferatu more.  Has anyone seen both of these?  Which do you like best?

TB Markinson is an American who's recently returned to the US after a seven-year stint in the UK and Ireland. When she isn't writing, she's traveling the world, watching sports on the telly, visiting pubs in New England, or reading. Not necessarily in that order. Her novels have hit Amazon bestseller lists for lesbian fiction and lesbian romance. She cohosts the Lesbians Who Write Podcast (lesbianswhowrite.com) with Clare Lydon. TB also runs I Heart Lesfic (iheartlesfic.com), a place for authors and fans of lesfic to come together to celebrate lesbian fiction.
View all posts by TBM →
This entry was posted in Movies and tagged AFI, AFI Top 100 Movies, American Film Institute, Best Cinematography, Best Picture, F. W. Murnau, Hermann Sudermann, Janet Gaynor, Movie Reviews, Movies, Nosferatu, Silent Films, Trip to Tilsit. Bookmark the permalink.