Last year I read Eragon, by Christopher Paolini, for Carl’s Once Upon a Time Challenge.  So it seemed fitting to read the sequel for this year’s challenge.  When I completed Eragon at first I wasn’t sold on the series.  I enjoyed it, but I wasn’t too excited to continue the books.  However, I found myself wondering what happened next.

The action in Eldest picks up right where the first novel ended.  Eragon and most of his allies have survived a battle and are in Tronjheim, a dwarf city.  There have been several casualties, including Eragon’s friend Murtagh and Nasuada’s father, Ajihad.  Nasuada becomes the new leader for the Varden.  After making an alliance with Nasuada, Eragon and Saphira, his dragon, set out for the forest Du Weldenvarden to receive training under the tutelage of Oromis and his dragon Glaedr.  Oromis and Glaeder are the only surviving Rider and Dragon who are not under the king’s control and keep their existence unknown from Galbatorix.  The king believes he has destroyed all of the Riders and Dragons to maintain his evil grip on the Empire.  When the king learned of Eragon and Saphira in the last novel he became determined to find them.  Oromis and Glaedr are crippled and so they cannot fight Galbatorix.  Eragon and Saphira are the last hope to defeat the Empire.

While Eragon is training his cousin Roran is being hunted by the Ra’Zac in Carvahall.  He doesn’t know that the reason he is being hunted is because of Eragon and Saphira.  Roran is unaware that Eragon is a rider and that he has a dragon.  Roran’s fiancée is kidnapped and he sets out to save the rest of the people in the village by leading them out of Carvahall to join the Varden in Surda.

Finally, the third storyline is Nasuada and the plight of the Varden after the battle.  She wants to attack the Empire but learns that wars are costly and has to find a way to finance her troops and citizens.

Paolini spends most of the time in this story setting up what will happen in the next novel in the series.  There is action here and there and the end of the novel has a battle with a twist I wasn’t expecting.  However, it is more about the preparation of Eragon, Roran and Nasuada.  Saying this, I actually really enjoyed the novel and I found it much more entertaining than the first book in the series.  As soon as I finished it I wanted to pick up the next book.  However, I think I will hold off and continue my tradition of reading the next book in the series for the Once Upon a Time Challenge. 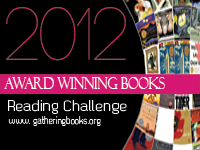 TB Markinson is an American who's recently returned to the US after a seven-year stint in the UK and Ireland. When she isn't writing, she's traveling the world, watching sports on the telly, visiting pubs in New England, or reading. Not necessarily in that order. Her novels have hit Amazon bestseller lists for lesbian fiction and lesbian romance. She cohosts the Lesbians Who Write Podcast (lesbianswhowrite.com) with Clare Lydon. TB also runs I Heart Lesfic (iheartlesfic.com), a place for authors and fans of lesfic to come together to celebrate lesbian fiction.
View all posts by TBM →
This entry was posted in Books and tagged Award Winning Books, Books, Christopher Paolini, Eldest, Eragon, Fantasy Novels, Novels, Once Upon A Time, Quill Award, Reading Challenges, Young Adult Literature. Bookmark the permalink.

31 Responses to Eldest by Christopher Paolini