We love to walk our dog in Holland Park in London.  The park isn’t as busy as Kensington Gardens and Hyde Park, but it does have a decent amount of traffic.  Even though Miles grew up on one of the busiest streets in Boston he does not like city streets and noise.  A few weeks ago we decided to see where one of the smaller streets near the park led in hopes that we could make it home and avoid most of the busy streets with the cars and big red buses.  He really hates the red buses.

Not only is this street a wonderful shortcut, but we found a quaint pub that we didn’t know about.  Thank you Miles!

The Scarsdale Tavern, located in Kensington, is a traditional pub that is close to Holland Park, Hyde Park, and Kensington Gardens.

Last week we were on our way to meet up with some friends and they were running late.  So we hopped into this pub to have a pint and to share an appetizer to pass the time.  The inside of the pub is inviting and there is much to look at.  I was happy that they had the French Open on the telly.  Many of the pubs here do not show sports.  And many of you know I love sports.  Obviously this was an added bonus. 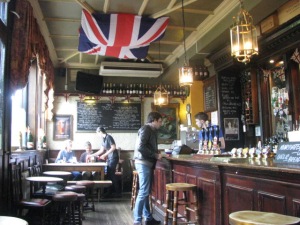 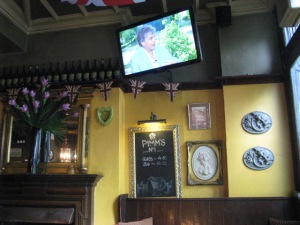 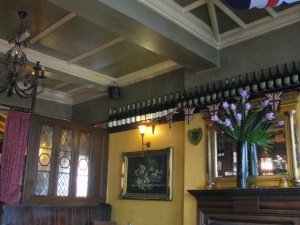 After we met up with our friends and had a delightful afternoon, on our way home we stopped at the pub again to enjoy a drink on their terrace.  The place was busy and we ran into another friend.  How in the world did we not know about this place until a few weeks ago? 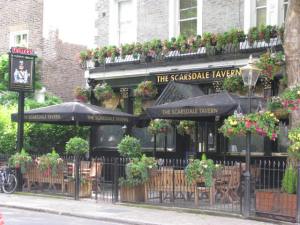 I would give this pub 4 out of 5 stars.  This rating may change, since in the winter I think they have fires going and after spending a cold day by a fire reading a book, well how could I not bump it up.  But I don’t want to get ahead of myself.  This research will have to continue folks.

TB Markinson is an American who's recently returned to the US after a seven-year stint in the UK and Ireland. When she isn't writing, she's traveling the world, watching sports on the telly, visiting pubs in New England, or reading. Not necessarily in that order. Her novels have hit Amazon bestseller lists for lesbian fiction and lesbian romance. She cohosts the Lesbians Who Write Podcast (lesbianswhowrite.com) with Clare Lydon. TB also runs I Heart Lesfic (iheartlesfic.com), a place for authors and fans of lesfic to come together to celebrate lesbian fiction.
View all posts by TBM →
This entry was posted in Weekly Pub and tagged 50 Year Project, England, English Pubs, Holland Park, Hyde Park, Kensington Gardens, Life, London, Photography, Photos, Pubs, Scarsdale Tavern, Travel Blog, Travel Photo, Travel Photos. Bookmark the permalink.

44 Responses to Look what Miles found