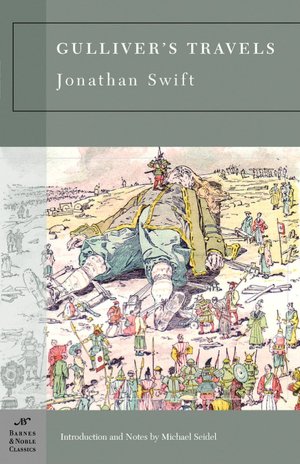 Many writers try to write satire.  And many of them fail.  When they succeed though, it is amazing.  One of my favorite books is Candide by Voltaire.  I’m not sure why satire is so hard to perfect.  It involves a mix of wit, irony, sarcasm and humor.   I don’t want to read a work that is only bitter and isn’t clever.  And I want to laugh.  It’s a fine line.

With some trepidation I started reading Gulliver’s Travels a couple of weeks ago for Carl’s Once Upon a Time challenge and the Classics Bribe challenge.  Many told me I would love it.  Sometimes too many ringing endorsements scare me since I expect greatness and then I am letdown.  I will say right from the beginning that Swift did not let me down.

This delightful tale was written by Jonathan Swift, an Irish writer.  The book chronicles four different voyages taken by Lemuel Gulliver.  I won’t go into detail about the journeys since the story is well known.  Instead I would like to include some of my favorite quotes to highlight’s Swift’s brilliance.

I hope the gentle reader will excuse me for dwelling on these and the like particulars, which, however insignificant they may appear to groveling vulgar minds, yet will certainly help a philosopher to enlarge his thoughts and imagination, and apply them to the benefit of public as well as private life, which was my sole design in presenting this and other accounts of my travels to the world.

This quote is after he describes how was able to go to the toilet in a strange land.  I hope philosophers are paying attention.

The captain was very well satisfied with this plain relation I had given him, and said, ‘he hoped, when we returned to England, I would oblige the world by putting it on paper, and making it public.’ My answer was, ‘that we were overstocked with books of travels: that nothing could now pass which was not extraordinary; wherein I doubted some authors less consulted truth, than their own vanity, or interest, or the diversion of ignorant readers; that my story would contain little beside common events, without these ornamental descriptions; or of the barbarous customs and idolatry of savage people, with which most writers abound.’  However, I thanked him for his good opinion, and promised to take the matter into my thoughts.

Not only is he mocking travel books, but his own account since Gulliver’s Travels includes many of these “ornamental descriptions.”  Also, he is saying that Gulliver is truthful, even though he lies throughout his travels.  And the inhabitants that he meets are not common.

But this I conceived was to be the least of my misfortunes; for, as human creatures are observed to be more savage and cruel in proportion to their bulk, what could I expect but to be a morsel in the mouth of the first among these enormous barbarians that should happen to seize me?  Undoubtedly philosophers are in the right, when they tell us that nothing is great or little otherwise than by comparison.

After his visit with the Lilliputians, who were tiny, Gulliver encounters giants in Brobdingnag.  This quote discusses two philosophical schools of thought.  One is that since these are giants they have more capacity for evil—there is more room in their bodies.  Yet, some believe that size is relative.  I find it interesting that he assumes that these giants are capable of more evil when he was recently a giant to the Lilliputians.  Of course, once he gets to know these giants he realizes that they aren’t so strange after all.

Even though I enjoyed the book, I can’t say that I liked it more than Candide.  This might not be fair since I have such a fondness for Voltaire’s story, which I read with one of my favorite professors during Grad School.  I remembering sitting in his office and discussing the book.  Gulliver’s Travels is a fun read and I’m glad that I finally got to it.  This past weekend I was reading parts from two separate books that made references to it.  The first was Bleak House by Charles Dickens and the second was Wild Swans by Jung Chang.  I have to wonder how many other references I’ve missed.  Does anyone have any suggestions for other satirical works?  I have two more on my list by Swift: A Modest Proposal and A Tale of a Tub.

TB Markinson is an American who's recently returned to the US after a seven-year stint in the UK and Ireland. When she isn't writing, she's traveling the world, watching sports on the telly, visiting pubs in New England, or reading. Not necessarily in that order. Her novels have hit Amazon bestseller lists for lesbian fiction and lesbian romance. She cohosts the Lesbians Who Write Podcast (lesbianswhowrite.com) with Clare Lydon. TB also runs I Heart Lesfic (iheartlesfic.com), a place for authors and fans of lesfic to come together to celebrate lesbian fiction.
View all posts by TBM →
This entry was posted in Books and tagged Book Reviews, Books, Candide, Fantasy, Gulliver's Travels, Irish Writers, Jonathan Swift, Literature, Novels, Satire, Voltaire. Bookmark the permalink.