Poop. I realize that many of you, if not all of you, weren’t expecting this topic on my blog today. I should be clear, I want to talk about poop and Barcelona. Several years ago, we spent a fantastic week in Barcelona (if you haven’t been, you should go!). On our last full day we were a bit tired so we spent the afternoon on La Rambla enjoying some sangria and paella.

Shortly after we finished our meals, a young couple sat at the table next to us. The man looked peeved. I assumed that they were in the midst of a lover’s quarrel and decided to suffer through a quiet, but tense lunch. An artist approached their table and obviously didn’t notice the mood of the couple. He started making a cutout of the young woman. When he finished, he asked the man to pay for the piece of art. The man refused. The artist crushed his work and threw it in the trash before storming off.

About this time, another man with a large dog walked by our tables. The man seemed to be in a hurry or pretended not to notice that his dog was pooping. Maybe he didn’t have a bag and thought ignoring it would be the best solution. For those of you who haven’t been to La Rambla, it’s a busy place. 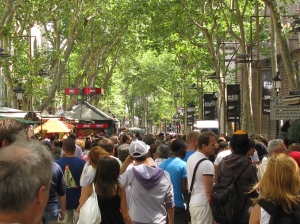 A few seconds after the dog and owner left, someone stepped in it. I know it isn’t kind, but the better half and I started laughing. I’ve been the victim of careless dog owners so I understand how much it sucks to step in it. Let’s face it, it’s funny to watch someone’s reaction when they step in dog poop.

Soon there was another victim and then another. That’s when I realized that the couple next to us was laughing. They noticed that we were also enjoying the scene and all of us started talking, when we weren’t chuckling. As it turned out, they were brother and sister. And they weren’t fighting. They had just arrived from Australia and were exhausted. The guy commented, “Why did that artist think I’d want a cutout of my sister!” To be fair to the artist, the siblings didn’t look anything alike and I assumed they were a couple. I didn’t mention this of course.

We talked with the siblings for about an hour and then all of us went on our merry way. I never thought I would have a bonding experience with strangers because of poop, but it happened. Traveling constantly offers me weird opportunities and I find myself laughing quite a bit on my trips.

Some random photos of La Rambla that have nothing to do with the story. 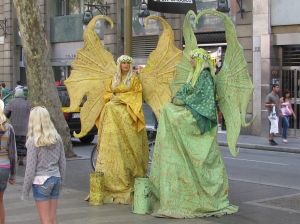 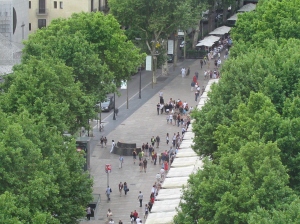 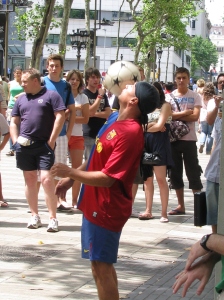 TB Markinson is an American who's recently returned to the US after a seven-year stint in the UK and Ireland. When she isn't writing, she's traveling the world, watching sports on the telly, visiting pubs in New England, or reading. Not necessarily in that order. Her novels have hit Amazon bestseller lists for lesbian fiction and lesbian romance. She cohosts the Lesbians Who Write Podcast (lesbianswhowrite.com) with Clare Lydon. TB also runs I Heart Lesfic (iheartlesfic.com), a place for authors and fans of lesfic to come together to celebrate lesbian fiction.
View all posts by TBM →
This entry was posted in Travel Stories and tagged 50 Year Project, Australians, Barcelona, Dog Owners, Dogs, Europe, Humor, La Rambla, Life, Life Stories, Paella, Photography, Sangria, Spain, Street Artists, Street Performers, Travel, Travel Blog, Travel Journal, Travel Photos, Travel Stories, Vacations. Bookmark the permalink.

41 Responses to Let’s talk about …