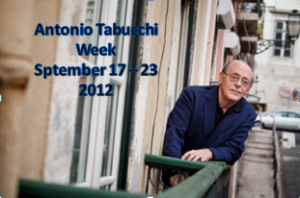 Caroline at Beauty is a Sleeping Cat is hosting an Antonio Tabucchi week. It runs from September 17-23. I apologize for not announcing my involvement earlier. But there’s still time to join. The novel I read was small and a quick read.

Tabucchi is an Italian writer who loved Portugal. He taught the Portuguese language and literature at the University of Siena in Italy. Given his love of Portugal I wasn’t surprised that his novel, Pereira Maintains, takes place in Portugal. The story follows Pereira, a journalist for a small Lisbon newspaper. He’s in charge of the culture section and does not bother himself with the news. The story takes place in the summer of 1938.

One day Pereira reads an article about death that intrigues him. He contacts the author of the article and asks to meet with him. The author, Monteiro Rossi, is an idealistic young man, during a time when idealism is not wanted. Actually, it could get you killed. At the time, Portugal is governed by the fascist dictator Antonio Salazar. Pereira is intrigued with the young man and offers him a job to write advanced obituaries for famous writers. Pereira maintains that these writers could die at any moment and he would like his newspaper to be on the ball.

Pereira is doing his best to stay out of politics, which isn’t easy since his entire life is dictated by fascist leaders. Rossi is a leftist and his obituaries lean this way. Pereira can’t use any of Rossi’s obituaries, yet he can’t seem to let the young man go either. Is it because he and his wife never had children of their own and he now regrets that since she has passed away and he is alone? Or is it because Pereira is trying to deal with his own feelings about the fascist government? Either way, his involvement with Rossi forces Pereira to get involved and to make a statement.

When I picked up this novel from the library, I was surprised by its size. I sat down last Saturday afternoon to start it. I finished it within a few hours in one sitting. Given its size I’m amazed by the complexity of the story. Love, life, politics, betrayal, and innocence are all explored. Throughout the entire story, I couldn’t quite tell who was telling the story. This mysterious narrator, kept mentioning that Pereira maintains, instead of Pereira said or believed. At first I was baffled by this. Who was this narrator and why did he keep informing me that “Pereira maintains.” As I continued reading, I realized that this technique is brilliant. The character didn’t want to get involved in politics. He wanted to stay out of the fray and to go on with his life. The use of maintains kept Pereira at a distance. This may not make sense to those who have not read it. And if you haven’t read it, I suggest you do. Very rarely do I come across novels that wow me. This is one. The writing is superb. Ever since I set it down I’ve been thinking about it. I think in a few years, I’ll revisit this novel to remember its beauty.

Even if you don’t have time to read any of his works this week, I highly recommend picking up some of his stories. This book counts towards one of my reading challenges, Award Winning Books. This novel won the Premio Campiello and the Viareggio Prize in 1994. By the way, I saw that Caroline is co-hosting a German Literature Month this November.

TB Markinson is an American who's recently returned to the US after a seven-year stint in the UK and Ireland. When she isn't writing, she's traveling the world, watching sports on the telly, visiting pubs in New England, or reading. Not necessarily in that order. Her novels have hit Amazon bestseller lists for lesbian fiction and lesbian romance. She cohosts the Lesbians Who Write Podcast (lesbianswhowrite.com) with Clare Lydon. TB also runs I Heart Lesfic (iheartlesfic.com), a place for authors and fans of lesfic to come together to celebrate lesbian fiction.
View all posts by TBM →
This entry was posted in Books and tagged 50 Year Project, Antonio Salazar, Antonio Tabucchie, Award Winning Books, Books, Fascism, Italian Writers, Life, Novels, Pereira Maintains, Portugal, Portuguese History, Premio Campiello, Viareggio Prize. Bookmark the permalink.