How to Handle Violence?

Recently I posted a review of the film The Wild Bunch. I stated that one of the aspects that I disliked about the film was the amount of violence and how I felt it was included for shock value. While watching this film I remembered two speakers I heard during the London Book Fair this past spring discuss violence and its role in fiction. I had the privilege to hear Anthony Horowitz and Patrick Ness speak.  Both write young adult fiction.  Before I continue, I should state that I have not read works by either of them.  I hope to fix this soon.

Patrick Ness mentioned that he likes to ask people to participate in a writing exercise.  He encourages people to write a brutal scene that involves a person they care about.  He believes that all violence in a novel should make the reader feel uncomfortable. Ness continued by declaring that every single person who has been tortured or worse in life more than likely was loved by at least one person.  His solution is to remember this and to stay true to the story.  If a writer stays true to the story, there will be the right amount of violence.  If an author decides to embellish the cruelty, the reader will sense this and will know that it doesn’t belong. 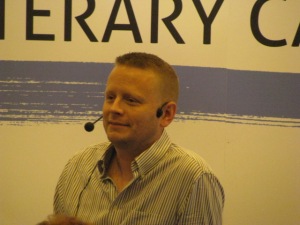 I found his comments interesting since later in the day I heard Anthony Horowitz state that he had no issues about having violence in his books.  He elaborated by stating that his fantasy works were already removed from reality and that he likes to handle the subject with a sense of humor.  He said, “Violence has to have a smile.”  Before you start shouting, he later went back to the subject and explained that he doesn’t take brutality lightly, but that his version is separated from reality. 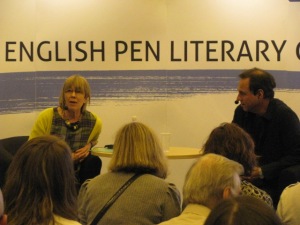 Anthony Horowitz is on the right.

What do all of you think? Is there a right way or wrong way to include violence in books, movies, or art?

TB Markinson is an American who's recently returned to the US after a seven-year stint in the UK and Ireland. When she isn't writing, she's traveling the world, watching sports on the telly, visiting pubs in New England, or reading. Not necessarily in that order. Her novels have hit Amazon bestseller lists for lesbian fiction and lesbian romance. She cohosts the Lesbians Who Write Podcast (lesbianswhowrite.com) with Clare Lydon. TB also runs I Heart Lesfic (iheartlesfic.com), a place for authors and fans of lesfic to come together to celebrate lesbian fiction.
View all posts by TBM →
This entry was posted in Books and tagged 50 Year Project, Anthony Horowitz, Art, Books, Fiction, Life, Literature, London Book Fair, Movies, Novels, Opinions, Patrick Ness, Photography, The Wild Bunch, Violence, Writing, Young Adult Fiction. Bookmark the permalink.

29 Responses to How to Handle Violence?