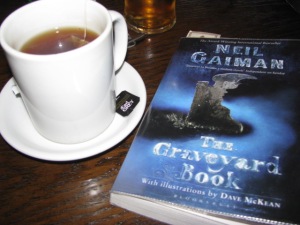 Back to Neil Gaiman folks. Last week the group discussed the first three chapters. This week we read Chapters 4-6. Please note that there may be spoilers in this post.

This is my second novel my Gaiman. Many of you may remember that I loved Neverwhere last spring. I started The Graveyard Book with great anticipation and a small amount of fear. Since I enjoyed Neverwhere so much I expected a lot from Gaiman and I didn’t want to be let down. I always feel this way when I read an author that I’ve recently discovered and adored. It can be crushing when a writer can’t live up to your hopes. It isn’t fair that I put so much pressure on them, but I do.

That said, I’m happy to report that this book is not a letdown. The first three chapters consisted of vignettes. We got glimpses into Bod’s life among his ghost family. The chapters for this week are less sporadic and more cohesive. I’m finding this tactic brilliant. First, Gaiman hooked me with the quaint idea that a baby was adopted by ghosts in a graveyard. Now that I believe, he’s building the story and connecting the dots that were planted in the first three chapters.

And we are watching Bod grow up. My favorite bit from this week’s readings is his relationship with Liza Hempstock, a witch who resides in the graveyard. Since she was killed for being a witch, she doesn’t have a headstone. Bod feels for his new friend and is determined to raise the money to buy her one. His plan backfires and has drastic consequences for him. The man Jack, who killed Bod’s entire family, hasn’t given up looking for Bod learns that the child is alive and is a threat.

My favorite aspect of Gaiman’s novel is that Bod is a sweet little boy. It would have been easy to have Bod turn out wrong since he has little contact with the living world. Instead, Gaiman’s loner learns to love and trust those around him. It’s one of the most original coming of age stories I’ve encountered and I’m pleasantly surprised by how much I love Nobody Owens.

Next week will be the conclusion of this novel. I can’t wait to find out what happens to Bod and the man Jack. For other discussions on this novel please check out this page.

TB Markinson is an American who's recently returned to the US after a seven-year stint in the UK and Ireland. When she isn't writing, she's traveling the world, watching sports on the telly, visiting pubs in New England, or reading. Not necessarily in that order. Her novels have hit Amazon bestseller lists for lesbian fiction and lesbian romance. She cohosts the Lesbians Who Write Podcast (lesbianswhowrite.com) with Clare Lydon. TB also runs I Heart Lesfic (iheartlesfic.com), a place for authors and fans of lesfic to come together to celebrate lesbian fiction.
View all posts by TBM →
This entry was posted in Books and tagged 50 Year Project, Book Clubs, Books, Fantasy, Ghost Stories, Life, Neil Gaiman, Neverwhere, Nobody Owens, Photography, RIP. Group Readings, The Graveyard Book, Young Adult Fiction. Bookmark the permalink.