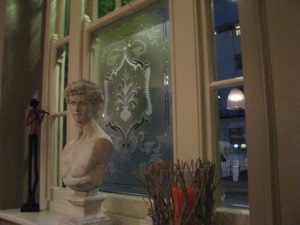 When we moved in Earl’s Court in 2011 we noticed The Hansom Cab. It looked like a pub so immediately I wanted to venture inside. Alas, I could not since it was under renovation. A few months later I saw that it was open. We walked in and then walked out. I didn’t feel posh enough to enter. The two of us speculated that maybe it was opening night, which could have been invite only. We didn’t stay to find out. A month or so later, I read some reviews and they weren’t that flattering, citing overpriced beers and bland food. Also I found out that it’s owned my Piers Morgan, a British journalist and television host. Currently he hosts Piers Morgan Tonight on CNN. After learning all of this about the pub, I decided to find out for myself.

Yet, months passed and I didn’t go back. A few weeks ago, my best friend was in town. When we walked by the pub I mentioned that Morgan owned it. This piqued her curiosity. That night we headed there for dinner. We sat at a table in the front part, by the bar. There isn’t a lot of table space. I think there’s more space in the back, but it was a weeknight and it wasn’t that busy so I didn’t mind the cramped seating.

My friend ordered a Shepherd’s pie that was decent but not incredible. I had a grilled halloumi salad with roasted vegetables and it hit the spot. The better half had a burger and was not disappointed. All in all, the food wasn’t as bad as I was expecting. The two gentlemen who waited on us were friendly chaps. The atmosphere was not very pub-like,

but I enjoyed that aspect. While my friend was in town, we visited many pubs (not that I’m complaining). It was nice to sit in a place and not be surrounded by dark wood. It’s not a five-star restaurant by any means. What I’m saying is, if you want to sample a different type of pub, this is an option. I’m not saying when in London, you have to go here. If you are near the area and want to find out about the pub owned by Piers Morgan, then I would suggest it. I should mention that many of the meals are slightly overpriced— you’ve been warned.

The three of us had an enjoyable night. Not the best meals. Not the worst. Overall I give the pub 3.5 stars. Sometimes it’s better to have low expectations when you try something new, that way you can be pleasantly surprised. 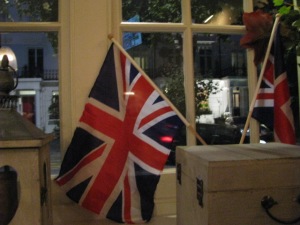 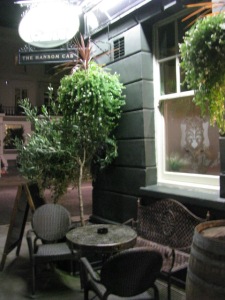 TB Markinson is an American who's recently returned to the US after a seven-year stint in the UK and Ireland. When she isn't writing, she's traveling the world, watching sports on the telly, visiting pubs in New England, or reading. Not necessarily in that order. Her novels have hit Amazon bestseller lists for lesbian fiction and lesbian romance. She cohosts the Lesbians Who Write Podcast (lesbianswhowrite.com) with Clare Lydon. TB also runs I Heart Lesfic (iheartlesfic.com), a place for authors and fans of lesfic to come together to celebrate lesbian fiction.
View all posts by TBM →
This entry was posted in Weekly Pub and tagged 50 Year Project, Blog, Blogging, CNN, Earls Court, England, English Pubs, Halloumi, London, Photography, Photos, Piers Morgan, Pubs, Salads, Shepherd's Pie, The Hansom Cab, Travel, Travel Blog, Travel Journal, Travel Photo. Bookmark the permalink.

17 Responses to The Hansom Cab Review