Last week I mentioned that I had stayed at a resort outside of Antigua, Guatemala, where I could observe a smoking volcano. Cindy asked for some photos. Antigua is surrounded by three volcanoes: Volcan de Agua (Volcano of Water), Acatenango, and Volcan de Fuego (Volcano of Fire). Fuego lets out steam and gas each day. Every morning, we would wander over to the restaurant to have breakfast. We would sit under an avocado tree to enjoy a fresh cup of coffee (we stayed on a working coffee plantation) and indulge in wonderful food. 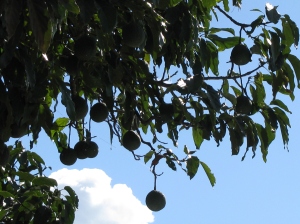 As we sat there, we would watch Fuego let off some steam. This volcano still has larger eruptions. The last one occurred in September of this year. 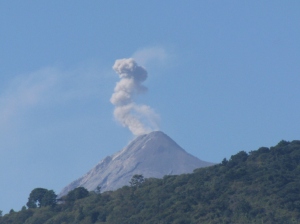 Later in the day, while hanging out by the pool, we would watch it smoke during sunset. 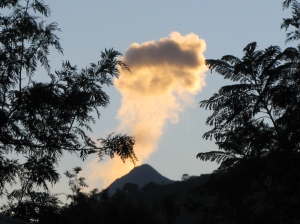 It’s an amazing thing to watch, but I don’t want to be there during an actual eruption. I hope all is well there now.

TB Markinson is an American who's recently returned to the US after a seven-year stint in the UK and Ireland. When she isn't writing, she's traveling the world, watching sports on the telly, visiting pubs in New England, or reading. Not necessarily in that order. Her novels have hit Amazon bestseller lists for lesbian fiction and lesbian romance. She cohosts the Lesbians Who Write Podcast (lesbianswhowrite.com) with Clare Lydon. TB also runs I Heart Lesfic (iheartlesfic.com), a place for authors and fans of lesfic to come together to celebrate lesbian fiction.
View all posts by TBM →
This entry was posted in Travel and tagged 50 Year Project, Acatenango, Antigua, Avocado Tree, Blog, Blogging, Guatemala, Photography, Photos, Travel, Travel Blog, Travel Journal, Travel Photos, Volcan de Agua, Volcan de Fuego, Volcano of Fire, Volcano of Water, Volcanoes. Bookmark the permalink.