Raise your hand if you like Thai food. Now if you like pubs. Okay, this one may be trickier, raise your hand if you like Winston Churchill. This last one may seem odd, but I studied history in grad school. World War II to be exact. Earlier this year I passed The Churchill Arms pub and made a mental note to go there.  That was five months ago. My memory isn’t what it used to be. However, I finally remembered and last Monday we took the day off and decided to be lazy in pubs. 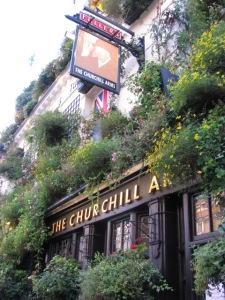 When we approached the pub the better half said, “I’ve been meaning to bring you here.” Does anyone believe in fate? As soon as I walked in, I knew I was in love. The walls and ceiling are covered in historical memorabilia. I wish I had more photos to show you, but everything was covered with spider webs. Not real ones, but ones they put up for Halloween. Trust me I didn’t get bored looking at all of the stuff. 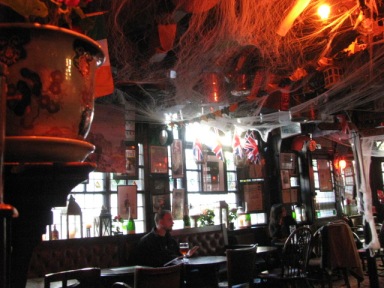 The second selling point for me was the fireplace. It was a chilly afternoon so we camped out by it. They don’t mess around when they have one going and we had to take turns sitting by the fire since one of us would get too hot.

At first we only stopped off for some drinks. Then we lingered. Eventually I got hungry and asked to see a menu. That’s when I discovered that there was a Thai restaurant in the back of the pub. The better half is not a huge fan of Thai. I love it. Now I have a pub that the better half likes and I can have one of my favorite foods. I thoroughly enjoyed the spicy Pad Kee Mao. Have I mentioned yet how much I love The Churchill Arms?

According to their website, the pub was erected in 1750. In the 1800s, Winston Churchill’s grandparents were habitual patrons of the pub. It’s also the first pub in London to serve Thai food. And if you haven’t noticed in the pictures, they love flowers and plants. They are the only pub to have been victorious in the Chelsea flower show.

This is the entrance to the washroom.

The pub is located on Kensington Church Street. If you are in the area, I highly recommend it. If you are a WWII nut, like me, I suggest finding this pub. I give it 5 out of 5 stars.

TB Markinson is an American who's recently returned to the US after a seven-year stint in the UK and Ireland. When she isn't writing, she's traveling the world, watching sports on the telly, visiting pubs in New England, or reading. Not necessarily in that order. Her novels have hit Amazon bestseller lists for lesbian fiction and lesbian romance. She cohosts the Lesbians Who Write Podcast (lesbianswhowrite.com) with Clare Lydon. TB also runs I Heart Lesfic (iheartlesfic.com), a place for authors and fans of lesfic to come together to celebrate lesbian fiction.
View all posts by TBM →
This entry was posted in Weekly Pub and tagged 50 Year Project, Blog, Blogging, Chelsea Flower Show, England, English History, Flowers, Kensington Church Street, London, Photography, Photos, Pubs, Thai Food, The Churchill Arms, Travel, Travel Blog, Travel Journal, Travel Photos, Winston Churchill, Winston Churchill's Grandparents, World War II. Bookmark the permalink.

31 Responses to The Churchill Arms