My pub research has taught me a few things, most importantly there are many different types of pubs. There are posh ones. Historical ones. Trendy. And now I know a good pub to watch QPR play. Don’t know QPR. Then you many want to skip this pub—at least on match day. The Queens Park Rangers is a football club that plays in the Premier League. And The White Horse is the perfect pub to watch them on the telly.

This pub doesn’t pretend to be anything that it isn’t  The beer is served in plastic cups. If you want food, I hope crisps will suffice. Want to pay with a credit card—too bad. We walked in when QPR was playing. There were only a handful of patrons. But there were two doormen. This led me to believe that after the match QPR fans would stream in. I was correct. I asked someone who came in after the match and this pub is only a ten minute walk from the stadium. 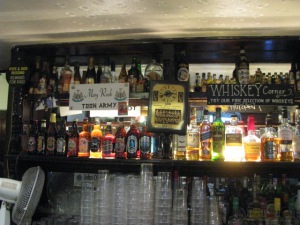 I snapped a couple of photos and I’ll be honest, this didn’t impress anyone. If you visit this pub, don’t take photos. They are there to watch football, not to pose for photos. After the match, I tried taking more photos to give all of you a sense of how crowded it got. I got more sneers and the better half told me to stop. I listened. 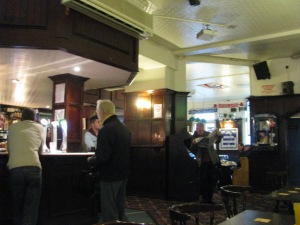 Before the crowd arrived.

Now you may think that everyone in this pub was unfriendly. Not true at all. I had several delightful conversations with QPR fans. I’m finding that many people in London get a kick out of two Americans who love to watch football. At first they think I’m joking, but then when I talk about the teams, players, and managers, they start to take me seriously. If I really want to impress them, I mention that I went to the World Cup in South Africa. I don’t always share that, but it does come in handy.

You may be wondering how we located this gem. To be honest, we were wandering around in Shepherd’s Bush and spied The White Horse. It was cold and I was thirsty. We watched the QPR match and then a Liverpool match. We made several friends. I will warn you that many of the patrons are not shy when it comes to their beer. They can drink copious amounts. There was no way I could keep up. When one gent spilled his beer all over me and another person the better half and I split. The natives were restless, and I was hungry. I needed more than crisps.

All in all, I liked this pub. I hate people and places that pretend to be what they aren’t  This pub is proud of being a pub that serves beer in plastic glasses. I admire that. And the next time I want to watch QPR play, I may head down to The White Horse and join in on the fun. And I’ll leave my camera at home—or at least in my bag. I give the pub 4 stars out of 5. There isn’t much to look at inside, but it has a great atmosphere and some real characters.

TB Markinson is an American who's recently returned to the US after a seven-year stint in the UK and Ireland. When she isn't writing, she's traveling the world, watching sports on the telly, visiting pubs in New England, or reading. Not necessarily in that order. Her novels have hit Amazon bestseller lists for lesbian fiction and lesbian romance. She cohosts the Lesbians Who Write Podcast (lesbianswhowrite.com) with Clare Lydon. TB also runs I Heart Lesfic (iheartlesfic.com), a place for authors and fans of lesfic to come together to celebrate lesbian fiction.
View all posts by TBM →
This entry was posted in Pub of the Week and tagged 50 Year Project, Blog, Blogging, England, English Premier League, English Pubs, Football, Photography, Photos, Pubs, QPR, Queens Park Rangers, Shepherd's Bush, Soccer, The White Horse, Travel Blog, Travel Journal, Travel Photos. Bookmark the permalink.

13 Responses to The White Horse