A Tale of Two Cities by Charles Dickens 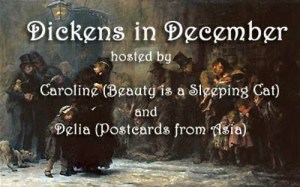 Many of you know I set out to read 10 books by Charles Dickens this year. When autumn arrived, I needed a break from Dickens. That’s when I heard that Caroline and Delia were hosting Dickens in December. So I set some of his books aside—four to be exact. Well, I may have set too many aside. However, I can’t change that now. I’ve completed three of them, and started the fourth and last one for the year. The last one, Our Mutual Friend, is over 700 pages. Odds are good that I won’t finish it. Only time will tell.

I have known for years that A Tale of Two Cities starts off with, “It was the best of times, it was the worst of times…” But that’s all I knew. From other bloggers I picked up that it was about the French Revolution.  Here’s a brief synopsis since many of you have read the novel. Charles Darnay, a French aristocrat is accused of treason. Sydney Carton is a cynical Englishman. He and Darnay look almost identical. This likeness helps Darnay escape the accusation. Yet, when Darnay travels to France during the French Revolution, can his life be spared during the terror?

What makes this novel one of the most famous historical fiction novels? For me, it’s the end. When I persevered through the first half I was rewarded with a story that impelled me to stay up late to finish the entire novel. When I started to piece together what was actually going to happen I couldn’t believe it. If you’ve read the novel, you know what I’m talking about. If you haven’t, I don’t want to ruin it for you. It was the ending of this novel that made me enjoy it. All I can say is, if you don’t like it at first, give it some time. It gets better.

Now I have two more reviews to write for 2012. Where did this year go?

TB Markinson is an American who's recently returned to the US after a seven-year stint in the UK and Ireland. When she isn't writing, she's traveling the world, watching sports on the telly, visiting pubs in New England, or reading. Not necessarily in that order. Her novels have hit Amazon bestseller lists for lesbian fiction and lesbian romance. She cohosts the Lesbians Who Write Podcast (lesbianswhowrite.com) with Clare Lydon. TB also runs I Heart Lesfic (iheartlesfic.com), a place for authors and fans of lesfic to come together to celebrate lesbian fiction.
View all posts by TBM →
This entry was posted in Books and tagged 50 Year Project, A Tale of Two Cities, Blog, Blogging, Book Reviews, Books, Charles Dickens, Dickens in December, England, English Literature, English Writers, French Revolution, Historical Fiction, Our Mutual Friend, Reading Challenges. Bookmark the permalink.

36 Responses to A Tale of Two Cities by Charles Dickens