An Adventure before the Adventure

Sometimes our adventure starts before we even leave our hometown. In 2007 we headed to the airport in Boston. Our destination was Honduras. It was our first big trip outside of the US together and we were excited. Both of us like to arrive to the airport early. I have a fear of missing flights, even though I’ve never missed one. The better half likes to have a cocktail before boarding the plane.

After relaxing at the bar by our gate we heard the boarding announcement over the PA. Grabbing our bags we headed to the plane. The gal checking the boarding passes and passports was in a horrible mood. In her defense, she had a terrible cold and looked like she should have been in bed. However, it was July 4th, a holiday in the States, and I don’t think going home was an option. She scared me somewhat and I remembered thinking I wouldn’t want to cross her.

Making our way to our seats on the plane I noticed a family of four trying to squeeze into three seats. There was a mother, father, and two children. The children were not small enough to sit on someone’s lap. I’m not sure what the cutoff age is, but I was certain that this wouldn’t fly.

Unfortunately I was right. The entire conversation between the father and flight attendant was in Spanish, however I feel pretty confident that I got the gist. The whole family was terrified of flying and wanted to be together. They had paid for four seats, but only wanted to sit in three. The flight attendant, who was fluent in Spanish, did his best to explain that this was a safety violation. Everyone has to sit in their seat with their seat belt fastened. No ifs, ands, or buts.

The argument went on for several minutes and got heated. Voices were raised. Arms flailed.  The flight attendant had to walk away once to calm his nerves. Then he went back. That’s when I saw the cranky ticket lady. As soon as I spied her, I held my breath. When I handed her my passport upside down, I thought she was going to rip my head off. It wasn’t intentional. Remembering this I cringed about what she would do to the family. Even though they were delaying our flight and we had a connecting flight to make, I felt bad for them. They all looked legitimately scared.

The ticket lady leaned against the door of the plane and took the scene in. Her face went white. And then purple. That’s when I thought, oh they are done for. Instead she burst into laughter. Gut splitting laughter. Everyone realized how ridiculous the situation was. Two minutes later, everyone was in their seat and they were closing up the doors.

Sometimes laughter is the best course of action. Anger begets anger. Laughter makes things better, usually. Remember that the next time you want to scream at someone. But don’t laugh at the person. You might get socked in the face and blame me. Laugh with them.

Here are a couple of photos from Honduras. This is what was calling my name and I wanted to get there. However, there was another adventure before we arrived at our destination. I’ll explain that next week. 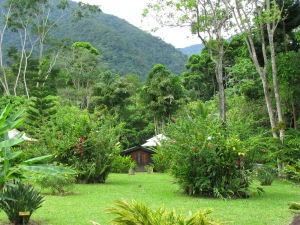 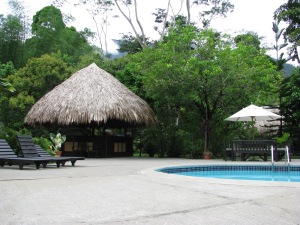 TB Markinson is an American who's recently returned to the US after a seven-year stint in the UK and Ireland. When she isn't writing, she's traveling the world, watching sports on the telly, visiting pubs in New England, or reading. Not necessarily in that order. Her novels have hit Amazon bestseller lists for lesbian fiction and lesbian romance. She cohosts the Lesbians Who Write Podcast (lesbianswhowrite.com) with Clare Lydon. TB also runs I Heart Lesfic (iheartlesfic.com), a place for authors and fans of lesfic to come together to celebrate lesbian fiction.
View all posts by TBM →
This entry was posted in Uncategorized and tagged 50 Year Project, Adventures, Airport Staff, Airports, Blog, Blogging, Boston, Flight Attendants, Honduras, Journey, July Fourth, Laughter, Life, Logan Airport, Photography, Photos, Plane Safety, rainforest, Travel, Travel Blog, Travel Difficulties, Travel Journal, Travel Photos, Traveling on Holidays, Vacations. Bookmark the permalink.

29 Responses to An Adventure before the Adventure