Travel Photo of the Day (January 14) 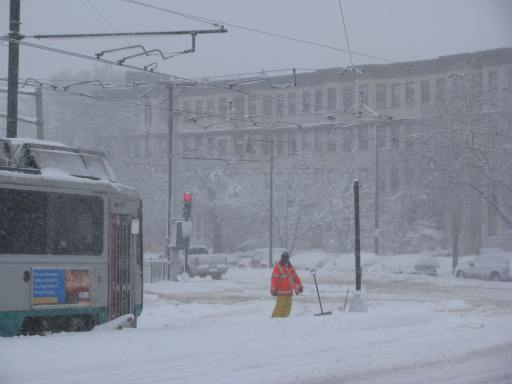 It snowed in London today and I enjoyed watching it fall. However, I want a big snowstorm, like the one pictured here. This photo was taken in 2011 in Boston, Massachusetts. However, I think the guy in the photo would disagree with me. He doesn’t look all that happy and I can’t blame him. During this storm, I played in the snow, not clean up the mess. That looks like hard work. So I hope for snow that won’t put anyone out. Is that too much to wish for?

TB Markinson is an American who's recently returned to the US after a seven-year stint in the UK and Ireland. When she isn't writing, she's traveling the world, watching sports on the telly, visiting pubs in New England, or reading. Not necessarily in that order. Her novels have hit Amazon bestseller lists for lesbian fiction and lesbian romance. She cohosts the Lesbians Who Write Podcast (lesbianswhowrite.com) with Clare Lydon. TB also runs I Heart Lesfic (iheartlesfic.com), a place for authors and fans of lesfic to come together to celebrate lesbian fiction.
View all posts by TBM →
This entry was posted in Travel Photos and tagged 50 Year Project, Blizzards, Blog, Blogging, Boston, Dreams, East Coast, England, Hopes, Life, London, Massachusetts, Photography, Shoveling Snow, Snow, Snow Storms, Travel, Travel Blog, Travel Journal, Travel Photo, Winter, Wishes. Bookmark the permalink.

50 Responses to Travel Photo of the Day (January 14)