Did she really say that?

Sometimes people say things and I immediately wonder if they meant to say it out loud. A few days ago Miles and I were walking through one of the parks in London. I won’t mention which one in case that person actually stumbles upon this posting—I know the odds are against it, but stranger things have happened.

During this afternoon stroll we encountered a mother and child. My guess is that the boy is around two. Miles hasn’t been around many children. You may find this odd, but when we lived in Boston we hardly ever saw kids in our part of town. We lived near Boston College and the only youngsters we bumped into were college kids. Miles more than likely cannot topple a college student. However, with a toddler I’m assuming the odds drastically increase.

When Miles meets people on the street he gets excited. And I haven’t been too successful teaching him not to jump on people. My apologies if you’ve experience this. What can I say, he loves people.

Back to the other day, the child was ecstatic to see a dog. They started to approach. I instantly started to back away, keeping Miles behind me. The mother stopped and I did my best to explain that Miles gets excited and likes to jump. How horrible would it be if Miles hurt the kid? She smiled at me and I thought the situation was over. But then she said, “That’s fine, we’ll find a better dog.”

I’m the first to admit that Miles is not perfect. Each day he does something that causes me to scratch my head and wonder about his intelligence. He doesn’t always listen. He’ll sniff the same lamppost every day like he’s never smelled it before. And yes, sometimes he barks. But to have a stranger tell me that she’ll find a better dog—well really! I’ve never told a parent, “You’re kid is cute, but I prefer the one over there who isn’t screaming its head off.” That would be rude and quite mean. Miles isn’t perfect, but he’s mine and I love him.

On my walk home I wondered if she meant it the way it sounded. I couldn’t decide. I’m pretty sure she hasn’t given me a second thought. I wish I could say her kid wasn’t all that, but he was pretty darn cute (how can anyone say anything bad about a child) and I loved his little jacket, hat, and mittens.

And speaking of adorable, here’s my dog. I think he’s the best! 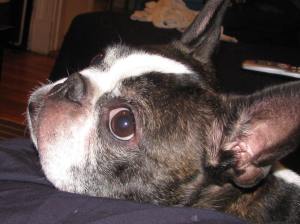 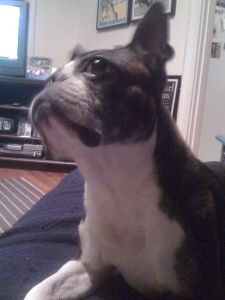 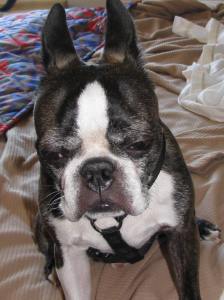 Now if you’ll excuse me, I need to rescue the cat from my dog.

TB Markinson is an American who's recently returned to the US after a seven-year stint in the UK and Ireland. When she isn't writing, she's traveling the world, watching sports on the telly, visiting pubs in New England, or reading. Not necessarily in that order. Her novels have hit Amazon bestseller lists for lesbian fiction and lesbian romance. She cohosts the Lesbians Who Write Podcast (lesbianswhowrite.com) with Clare Lydon. TB also runs I Heart Lesfic (iheartlesfic.com), a place for authors and fans of lesfic to come together to celebrate lesbian fiction.
View all posts by TBM →
This entry was posted in Animals and tagged 50 Year Project, Animals, Blog, Blogging, Boston, Boston College, Boston Terriers, Dog Humor, Dog training, Dogs, England, Humor, Life, London, People say the oddest things, Photography, Photos. Bookmark the permalink.

70 Responses to Did she really say that?