I’m going to be murdered in a rainforest

Last week I wrote about the start of our trip to Honduras. Before we even left Boston, it was an interesting trip. We had two flights. The connecting flight was in Miami. The plane from Boston was late, but the next flight was also delayed. So we camped out at a restaurant waiting for the rain in Miami to subside. In my everyday life, I do my best to eat healthy. When I’m on a trip, my eating healthy rule goes right out the window. While we waited for the plane, the better half enjoyed some beers and I relished a greasy burger and fries. In my opinion, the trip starts when you leave your home with luggage.  This means I can start eating all the crap I want as soon as possible. I’ve even had a cab driver stop on the way to the airport for food.

After a couple of hours I started to get nervous knowing that when we arrived in Honduras, we still had a two hour drive to our destination. We had a car and driver hired for this trip. However, since our flight was delayed we started to worry if our ride would still be there. It was after working hours so we couldn’t contact the company we booked the trip through. The only thing we could do was hope for the best. Our short jaunt to Honduras was turning into an all day trip.

Finally, the rain stopped. The flight was a little over two hours. Then another hour in the customs line before we made our way outside of the airport in Honduras. There was a throng of people. Many of them were shouting to their loved ones. Eventually I spied a man holding a sign that had my first name and the better half’s last name. I approached. When I tried to verify if he was our driver I found out he didn’t speak any English. And my Spanish was rusty. I did my best to ask if he was driving up to our lodge. When I said the lodge’s name he looked at me like he had never heard of the place.

This did not give me a warm fuzzy feeling. Not at all. But it was one in the morning and seriously, what were the odds that he would have a combination of our names on his sign. We rolled the dice. Both of us were exhausted. Yet we didn’t want to fall asleep in the car. I still wasn’t completely convinced that this was our driver. I did my best to follow the road signs to see if we were heading in the right direction. One problem, I had never been there before. Second problem, I can’t read Spanish.

At one point the driver pulled into a deserted gas station. It was dark and foreboding. He asked me a question. I couldn’t understand. He got out of the car and disappeared behind the building. The better half and I exchanged nervous glances but we didn’t speak. My guess was he needed a bathroom. Seconds turned into minutes. My eyes kept scanning every square inch of that parking lot. Every horror film infiltrated my mind.

About five minutes later the driver returned. He looked at us and smiled. I should have mentioned that he had the sweetest smile and seemed super nice. An hour later we pulled off the main highway onto a gravel road. Our lodge was at the base of the Pico Bonito National Park. All I could see from the window was tall trees. There was a checkpoint and two men with big, black guns approached the driver’s window. There was a conversation and everyone kept pointing into the backseat at us. I have no clue what they said.

They waved the driver through and we pulled up in front of a building. We got out. Two more men approached us. They lifted our bags onto their backs and motioned with flashlights where we should walk. The walkway was gravel and the crunching sounds under my feet made me squirm. I didn’t know where I was. I didn’t know who I was with. There was no reception to check us in—I never saw a sign for our lodge. For all I knew, I would never see Boston again.

After a short walk, we were led to a small cabin. They unlocked the door, set our bags down, handed me the key, and then left. No words were said. I looked at the better half and asked, “Is this for real?” I didn’t get a response. I double locked our door. Both of us went to bed without changing our clothes. All night, some creature raced back and forth on the roof of our cabin. Neither of us got much sleep. Near day break, I could hear people walking back and forth outside. Crunching gravel is such an annoying noise.

Eventually I was brave enough to open the cabin door to see where in the heck I was. This is what I saw. 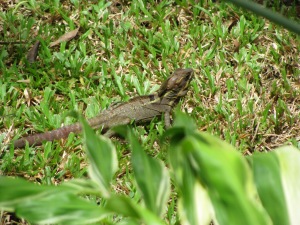 Was he on the roof all night? 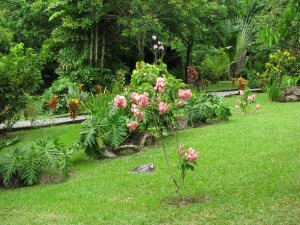 As it turned out, our lodge was tracking our flights and was in constant contact with our driver to ensure that we would arrive safe and sound. The men with guns expected us. However, when you don’t know that, it is intimidating. First thing they did that morning after checking us in was to hand us our welcome drinks. It was still early in the morning. But I didn’t care. The drink was tasty and all of my tension left by body. We spent seven days in tropical paradise.

Now I hope to travel to South America in 2014. I need to brush up on my Spanish so I don’t repeat this situation.

TB Markinson is an American who's recently returned to the US after a seven-year stint in the UK and Ireland. When she isn't writing, she's traveling the world, watching sports on the telly, visiting pubs in New England, or reading. Not necessarily in that order. Her novels have hit Amazon bestseller lists for lesbian fiction and lesbian romance. She cohosts the Lesbians Who Write Podcast (lesbianswhowrite.com) with Clare Lydon. TB also runs I Heart Lesfic (iheartlesfic.com), a place for authors and fans of lesfic to come together to celebrate lesbian fiction.
View all posts by TBM →
This entry was posted in Travel Stories and tagged 50 Year Project, Blog, Blogging, Boston, Communication Problems, Fear, Flight Delays, Honduras, Humor, Life, Miami, Murder, Pico Bonito National Park, rainforest, Spanish, Third World Countries, Travel, Travel Blog, Travel Concerns, Travel Journal, Travel Photos, Traveling Difficulties, Vacations, Wildlife. Bookmark the permalink.