I laughed so hard I peed my pants 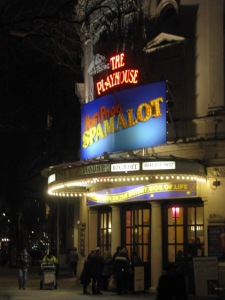 Okay, not really. But I did have a jolly good time. Over the holidays, the better half won a theater ticket and was kind enough to pass the ticket along to me. Only one show was available for a reservation: Spamalot at the Playhouse Theatre in London. Now I have a confession. I’ve never seen Monty Python. Given this, I wasn’t sure if I would like the show or not. Fear lot Monty Python lovers, I enjoyed the it. And first thing this morning, I added the movie to my rental queue.

The show opens with a historian giving a brief rundown of medieval England. The next number is hilariously since there is some confusion and a bunch of Finnish villagers appear on the stage thinking the narrator said Finland, not England. After this number, the show gets back on “track.” At least they go back to England. It’s hard to summarize what happens in this show since it is all bizarre and in order for those who haven’t seen it, I would have to explain it scene by scene for you to follow along. I’m not going to. Here’s the gist, King Arthur and his knights have to find the Holy Grail. If you want to find out the how, why, and if they are successful I highly recommend seeing the show. You won’t believe all of the hilarity. At least I didn’t.

One of my favorite aspects of the show is that they know they are being utterly ridiculous. Not only are they mocking history, religion, and legends, they are poking fun at their own show and society today.  If you aren’t paying attention you may miss many of the jokes. That isn’t to say that the show is difficult to follow. Even though they move from one absurd situation to another, it’s done seamlessly. I know I couldn’t write it. I’m doing a horrible job of telling you about it. Trust me—it’s funny! This was the first time when the show ended someone from the audience stood up and shouted bravo. I’ve seen this happen in movies, but never actually experienced it. And I’m pretty certain he wasn’t planted in the audience.

Now I need to watch the movie.

On the way to the theatre I passed this bridge and the London Eye. I think this bridge is the Hungerford Bridge, but I’m not certain. Does anyone know?

TB Markinson is an American who's recently returned to the US after a seven-year stint in the UK and Ireland. When she isn't writing, she's traveling the world, watching sports on the telly, visiting pubs in New England, or reading. Not necessarily in that order. Her novels have hit Amazon bestseller lists for lesbian fiction and lesbian romance. She cohosts the Lesbians Who Write Podcast (lesbianswhowrite.com) with Clare Lydon. TB also runs I Heart Lesfic (iheartlesfic.com), a place for authors and fans of lesfic to come together to celebrate lesbian fiction.
View all posts by TBM →
This entry was posted in London and tagged 50 Year Project, Blog, Blogging, England, Finland, Finnish Villagers, Holy Grail, Humor, Hungerford Bridge, London, London Eye, Medieval England, Monty Python, Musicals, Photography, Photos, Playhouse Theatre, Satire, Spamalot, Thames River, Theatre, Theatrical Shows, Wit. Bookmark the permalink.

57 Responses to I laughed so hard I peed my pants