In an attempt to recover from the holidays, which no matter how hard I try to keep expenses reasonable, they always seem to add up nevertheless, we have been sticking closer to home over the weekends. This limits our pub choices. A quick search on the web revealed that there was a pub that was so close to home I’m surprised I didn’t smell it. Okay, I may be exaggerating a tad. But I am disappointed by the fact that I didn’t discover it sooner.

The Atlas, located on Seagrave Road in Fulham is a gastro pub. I was pleased to see that

they had Pilsner Urquell, a Czech beer that I fell in love with during my stay last December in Prague. When we walked into the pub it was packed. All of the tables were taken and there was limited standing room. This was a disappointment since I had planned on having dinner there. However, it was a Friday night and good pubs are usually crowded. We decided to have one beer and then find a different place to eat. Then something happened. While I stood at the bar for far longer than I would have liked, a table for two opened up. Yes! 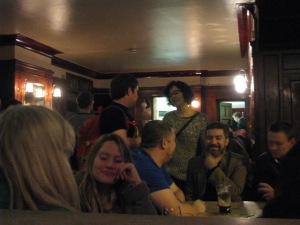 The better half did an excellent job of securing the table and I grabbed a couple of menus from the bartender. Dinner was on! I mentioned that this is a gastro pub so you can order linguine with crab, roast duck breast and stuffed onions, roast Pigeon salad, or wild rabbit with tomato, pancetta, and sage. This isn’t the whole menu, but I hope it gives you an idea. I decided for a more simple meal and ordered their mozzarella and slow roast tomato sandwich. I was not disappointed with my choice. The Focaccia bread was light, fluffy, and savory. The mozzarella was plentiful and the tomatoes and pesto added just the right amount of pizzazz. The roast potatoes on the side were simply divine.

While I enjoyed my beer, dinner, and atmosphere there are two aspects of the pub that

aren’t that great. As I mentioned above, the service was a bit slow. Of course, I understand that it was extremely crowded that night and so I won’t dwell on it too much. The other aspect was the bathroom. One of the toilets was missing the seat. Actually the seat was accounted for. I found it bizarre that it was propped up against the wall. Are patrons supposed to pick it up, place it on the toilet, and then put it back on the floor when done? The only sink was not functioning properly and water was pooled on the floor.

If the bathroom situation was fixed completely I would rate this pub as a 4 out of 5. Based on my experience I have to give it a 3.5 or 3. 75. There is an outdoor area and I would like to go back on a warm summer afternoon to enjoy it. Right now, it is too chilly to venture outside even for pub research. Maybe by summer, the bathroom will be repaired.

TB Markinson is an American who's recently returned to the US after a seven-year stint in the UK and Ireland. When she isn't writing, she's traveling the world, watching sports on the telly, visiting pubs in New England, or reading. Not necessarily in that order. Her novels have hit Amazon bestseller lists for lesbian fiction and lesbian romance. She cohosts the Lesbians Who Write Podcast (lesbianswhowrite.com) with Clare Lydon. TB also runs I Heart Lesfic (iheartlesfic.com), a place for authors and fans of lesfic to come together to celebrate lesbian fiction.
View all posts by TBM →
This entry was posted in Weekly Pub and tagged 50 Year Project, Blog, Blogging, Czech Beer, England, English Pubs, Fulham, Gastro Pub, Life, London, Photography, Photos, Pilsner Urquell, Prague, Pub Review, Pub Toilets, Pubs, Seagrave Road, The Atlas, Toilets, Travel, Travel Blog, Travel Journal, Travel Photos, Weekly Pub Review. Bookmark the permalink.

21 Responses to The Atlas Pub