One of the things I do before traveling to a new country is check out the U. S. Department of State’s website for travel warnings and tips. When preparing for my trip to Guatemala I hopped onto the website and was quite disheartened. Crime was abundant. And I’m talking about violent crime: murder, rape, and armed assault to name a few. The site advised staying in groups especially when hiking some of the volcanoes.

To add to my worries, one of my coworker’s would spend his lunch hour telling me horror stories from his son-in-law who was from Guatemala. One of the stories that stuck was that some criminals would cut off your finger to steal your ring. This made an impression on me.

I’m not sharing this information to scare anyone from traveling. I think it’s important to be informed and aware of possible threats. And I also know that crime like this exists in many areas in the world, including America. 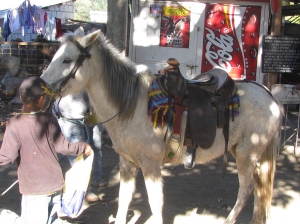 I didn’t opt to ride a horse. Halfway up I regretted my decision

We still planned a trip hiking a volcano, but joined a group for safety reasons. When our vans entered the small village at the base of the hike, a small boy shouted, “The gringos are here!” Our cover was blown. But I was determined to stay vigilant. Well as vigilant as I could be considering I was completely exhausted from this activity (to see more on this visit this page). The entire day we didn’t encounter any problems, except for the van getting a flat tire. After making it back down, I sat on a stone wall while we waited for the remaining members of our group. That’s when I heard a rustle in the bushes behind me. I had been warned that people wielding machetes were quite dangerous and should be avoided. So imagine my horror when I saw a man with a machete emerge from the bushes. My legs were shot from the hike and I thought, “Well this is it.” There was no way I could muster up the energy to run. No way. 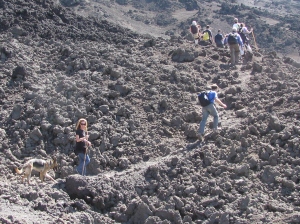 Not the easiest hike I’ve been on. As you get closer to the top, the rocks are hot.

Then I looked closely at the man. No one else around me was panicking. No one was screaming. As it turned out the gentleman was just getting firewood. What’s the point of this story: be informed and aware of your surroundings but don’t go overboard and think every person wants to kill you. Most of the time, the people I meet on my trips are quite pleasant and fun to talk to. I’ve met a few crazies. The most memorable one was on a train in New York City. But that’s a whole different story. 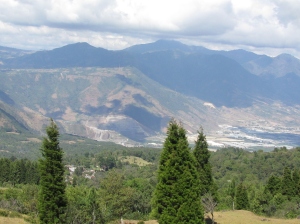 The view on our way to Pacaya was stunning.

TB Markinson is an American who's recently returned to the US after a seven-year stint in the UK and Ireland. When she isn't writing, she's traveling the world, watching sports on the telly, visiting pubs in New England, or reading. Not necessarily in that order. Her novels have hit Amazon bestseller lists for lesbian fiction and lesbian romance. She cohosts the Lesbians Who Write Podcast (lesbianswhowrite.com) with Clare Lydon. TB also runs I Heart Lesfic (iheartlesfic.com), a place for authors and fans of lesfic to come together to celebrate lesbian fiction.
View all posts by TBM →
This entry was posted in Travel Stories and tagged 50 Year Project, Blog, Blogging, Guatemala, Life, Pacaya Volcano, Photography, Photos, Travel, Travel Blog, Travel Photos, Travel Stories, Travel Tips, Travel Warnings, U. S. Department of State. Bookmark the permalink.

56 Responses to A lesson learned