On Sunday we went on a run through London starting at the Temple Tube stop all the way to Earl’s Court. I should say run/walk. The entire journey was around 4 miles (we didn’t take a straight shot), which is a little far for me. Running through crowds can be difficult at times; however, seeing all the sights is inspirational.

Not the most beautiful spot to start a run. However, I was already nervous about the four miles so I didn’t want to venture further.

Made it to the Eye, the first landmark

Big Ben. I’m getting tired already and am settling for a lackluster shot. Not a good sign. 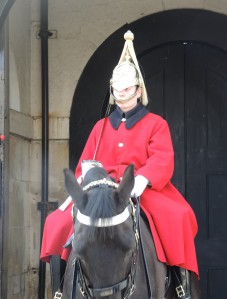 This guard and horse don’t want to look at me.

Took a shortcut through here. Not sure which museum this is. The Guards?

The Mall is closed to cars on Sunday.

I couldn’t do this job. What happens if you have to sneeze?

So thirsty. Need to rehydrate. I also had a glass of water. What can I say, it was Sunday and beautiful out. Time for a beer.

And to watch a few minutes of a football match on the telly. Photo taken in the Back Room Bar–the place I reviewed on Friday

As we ran through the tunnel near the Hyde Park Tube stop I saw this tent. The bottle says pension plan. This breaks my heart. 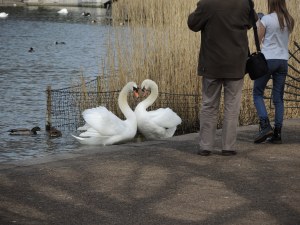 Love is in the air in Hyde Park

Another shot of the Mandarin. Such a beautiful creature.

Thanks goodness I made it to Holland Park. Only one mile to go!

Took a little breather in the Japanese Garden in Holland Park.

It took longer than I thought it would. Maybe we shouldn’t have stopped for a beer. Yet, it was tasty and that’s what weekends are for. So far the training for my hike in Malaysia is going well. Three more weeks!

76 Responses to Running through London