One of the authors I heard yesterday at the London Book Fair was William Boyd. Boyd, a novelist and screenwriter, has penned seventeen books. He won the Whitbread First Novel Award for A Good Man in Africa in 1981. He was shortlisted for the Booker Prize for his novel An Ice-Cream War in 1982. Restless won the Costa Book Award in 2006. 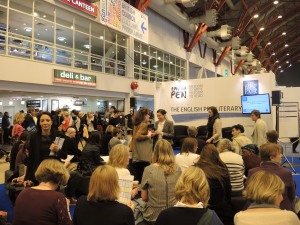 The crowd before the talk. 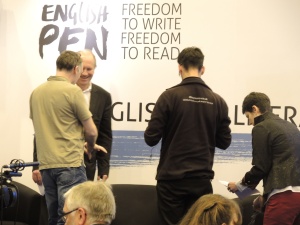 He arrives and looks chipper.

And now he has written the next James Bond novel, which will be published in September. He’s always been fascinated by Ian Fleming as an individual. In fact, he had Fleming as a character in one of his novels Any Human Heart. When he was asked to write a Bond novel he said yes instantly. To prepare for his project he re-read all of Fleming’s novels. And he has worked with three actors who have portrayed James Bond in film: Sean Connery, Pierce Brosnan, and Daniel Craig. 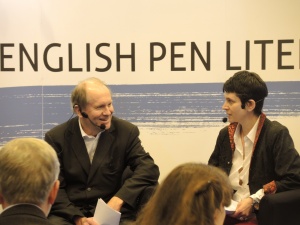 Boyd is interested in the man who is depicted in literature. Yes, many people know Bond via the film, but that Bond is more one-dimensional. The literary Bond is incredibly rich and the author wants to explore the man more, not just the adventure. His novel is set in 1969. This was the year when William Boyd was in London for the first time. He grew up in Africa. He said that it was fun revisiting his younger self (he was seventeen at the time) and remembering all the fashion and music from the time period. In 1969, James Bond was forty-five. The Sixties, according to Boyd, were a modern time, but still different from today’s world. They had cool cars, people wanted to look cool, and they lived similar lives. Yet it was completely different since they didn’t have the technology that we have today: Internet, GPS, and mobiles. He believes that technology has ruined spy novels to a certain degree.

At the end of the talk William Boyd had big news. He announced that the title of his Bond novel is Solo. He wouldn’t say too much about the novel except to say that Bond will travel to three continents: Europe, Africa, and North America. Something happens in Africa that causes Bond to go solo and he ventures on a private mission. All of us will have to wait until September to find out more.

Please note that I will be at the fair all day today and tomorrow. I will will do my best to respond to comments and visit your blogs when I can. Have a wonderful two days! 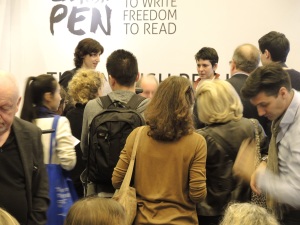 The rush to get photos and to speak to Boyd after the event. 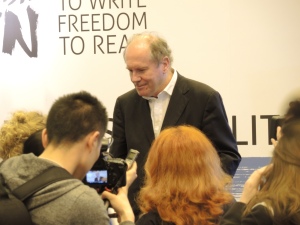 I wonder if he is relieved that his interview is over?