Yesterday we watched the London Marathon from the Walkabout Terrace located next to the Temple Tube Stop. Usually I would share more information, but today and the rest of this week will be super busy. So without further ado, here are the photos.

Our view as we settled in.

A wheelchair competitor. I missed the leaders since they went by as soon as we arrived and I was having a camera issue–I left the lens cap on.

“I like your hat, can I get your digits.”

One of the elite runners

This group cheered their little hearts out the whole time.

Some athletes amaze me. This is a blind man running with his guide. 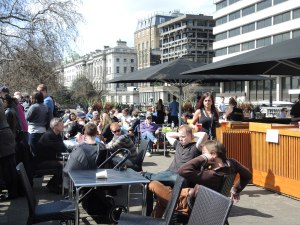 The scene where I was sitting.

Some spectators from the terrace.

I hope everyone has a great week. We leave for Malaysia later this week so I’m not sure how often I’ll be able to pop in on blogs and update posts. I’m hoping I don’t have to run around like a mad person all week, but that’s how it usually works out before taking time off. At least for me. I’m organizationally challenged and each time it’s a photo finish.

TB Markinson is an American who's recently returned to the US after a seven-year stint in the UK and Ireland. When she isn't writing, she's traveling the world, watching sports on the telly, visiting pubs in New England, or reading. Not necessarily in that order. Her novels have hit Amazon bestseller lists for lesbian fiction and lesbian romance. She cohosts the Lesbians Who Write Podcast (lesbianswhowrite.com) with Clare Lydon. TB also runs I Heart Lesfic (iheartlesfic.com), a place for authors and fans of lesfic to come together to celebrate lesbian fiction.
View all posts by TBM →
This entry was posted in London, Sports and tagged 2013 London Marathon, 50 Year Project, England, Life, London, London Marathon, Marathons, Photography, Photos, Running, Sporting Events, Sports, Temple Tube Stop, Walkabout. Bookmark the permalink.