Back in December 2012 I started training for Mount Kinabalu. Many of you have followed and encouraged my training and I would like to say thank you for the kind words and support. Before I share about my experience I would like to provide some details about the mountain. It is located on the island of Borneo in Southeast Asia. It’s a World Heritage Site and it is the 20th most prominent mountain in the world by topographic prominence. The summit, Low’s Peak, is 13,435 ft (4,095 meters) above sea level. Reaching the summit does not require any mountaineering equipment. However it is important to note that this is not a walk in the park. My paperwork suggested that I speak to my doctor to ensure I was medically fit for this climb. I don’t recommend attempting this if you aren’t used to physical activity. Be prepared.

Hugh Low, a British colonial administrator, completed the first recorded climb of Mount Kinabulu. He reached the summit plateau in 1851. He didn’t attempt to make it to the highest peak since he thought it was “inaccessible to any but winged animals.” In 1888, zoologist, John Whitehead, ascended the highest point. Lilian Gibbs, a British botanist, was the first woman to reach the summit in 1910. In 1964 Kinabalu National Park was created and by 2000, it became a natural World Heritage Site.

No one can climb this mountain without a guide. Some climbers complete it in one day. Many others take 2 days. If you plan on 2 days, like we did, the first day involves a 6 kilometer hike to the Laban Rata Resthouse, which is at 10,730 ft (3,270 meters). The

I thought I had it bad!

first day usually takes 3 to 6 hours. There are no roads to the top. All supplies for the resthouse are carried by porters. Hot food and beverages are available at Laban Rata. Most of the rooms, except the dining area, don’t have heat and most don’t have hot water in the bathrooms. And it gets cold. Especially if you get caught in the rain on the way up. More on that later.

The second day’s climb is over 2 kilometers. The last bit is on naked granite rock. I didn’t really understand this until I was there. On this day you ascend from 10, 730 ft to 13,436 ft. This increase in altitude may cause difficulty in breathing and moving. I also found it drastically impacts your thinking.

How do you walk on that?

Why did I decide to climb this mountain? When I first started planning the trip, I enlisted the help of two friends who live in Malaysia. One said, “You can’t leave Malaysia before climbing Mount Kinabalu.” She neglected to tell me all the details. I had a feeling it would be tough so I purposefully avoided reading too much about it until I booked the trip and locked myself in. Maybe that was a mistake. Knowledge is power. But I didn’t want fear to win.

When the big day finally arrived, we had a two hour drive from our hotel to the starting point. It was a nervous two hours. Then we arrived at the base and I saw all the hustle and bustle.

No one seems to know what’s going on. 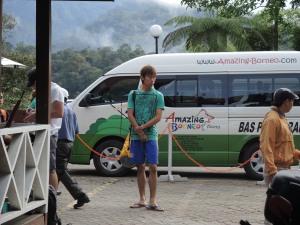 This didn’t settle my nerves one bit. Briefly I considered hailing a cab and spending the next two days on the beach. While I was contemplating this, the Better Half was checking us in. Our guide arrived. It was too late. I was committed to the hike. We climbed into a van and headed for the starting point. Here we go!

No one told me about the rocky stairs.

89 Responses to Mount Kinabalu: The Facts