Today I woke up and realized that it’s Thursday. Where did this week go? And I still have a few deadlines before I can go to a pub on Friday night. Saying that, here’s a quick post about Malaysia and Sense and Sensibility.  What, you don’t remember Malaysia playing a role in the novel. You’re right it didn’t. But while I was on holiday I reread this book for my 50 year challenge. I don’t plan on reviewing the novel besides saying it’s one of my favorites by Austen. This was my second or third time reading it, but I’m sure I’ll associate it now with Malaysia since the views were amazing when I found the time to read.

I read bits and pieces of this in between river cruises on the Kinabatangan.

During my stay in Danum Valley, for almost an hour it was pouring out, giving me the opportunity to read. 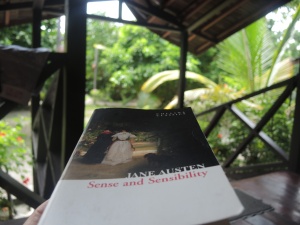 In the early morning I sat on my private deck on Mabul Island to read.

Sometimes I was too distracted to read whilst on Mabul Island.

Fellow readers on the island.

And now I have a confession. Many of you know I’ve been on a book ban, which meant I couldn’t buy any books all this year.  Well, I only packed Sense and Sensibility for my trip. Normally I pack two or three and then don’t even get through one. So I thought I was being smart by only bringing one. Long story short, before boarding the plane for two seven hour flights I stopped in the bookshop and bought Kafka on the Shore. It was an emergency, after all. A week later, the Better Half took me to a couple of used bookstores for my birthday. It was wonderful. I’m not sure if I’ll implement the book ban again.

TB Markinson is an American who's recently returned to the US after a seven-year stint in the UK and Ireland. When she isn't writing, she's traveling the world, watching sports on the telly, visiting pubs in New England, or reading. Not necessarily in that order. Her novels have hit Amazon bestseller lists for lesbian fiction and lesbian romance. She cohosts the Lesbians Who Write Podcast (lesbianswhowrite.com) with Clare Lydon. TB also runs I Heart Lesfic (iheartlesfic.com), a place for authors and fans of lesfic to come together to celebrate lesbian fiction.
View all posts by TBM →
This entry was posted in Travel Stories and tagged 50 Year Project, Asia, Beach Reads, Books, Danum Valley, Holiday Reading, Jane Austen, Kinabatangan River, Life, Mabul Island, Malaysia, Photography, Photos, Reading on Holiday, Sense and Sensibility, Travel, Travel Blog, Travel Journal, Travel Photos. Bookmark the permalink.