In our quest to explore different neighborhoods within London we’ve been finding new pubs as well. I call that a win-win. Last Sunday, we left the Mile End Tube station and made our way to Victoria Park. Along the way, we spotted The Victoria. Granted we hadn’t been walking all that long, but I still wanted to hop in and try it. Does one really need a reason to go to a pub? I think not.

This pub is much bigger than the typical pubs I’ve visited. And it has character. Actually, I’m not sure how to describe the inside. It’s a hodgepodge of artwork, stuffed animals (I’m assuming real), and a plethora of leather couches and chairs. 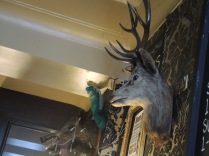 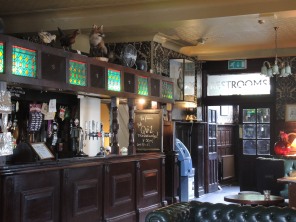 If you forgot to bring a book, no worries. There’s plenty to read in the bathroom. At least in the women’s bathroom. I did snap a photo of the men’s bathroom from the hallway since I thought the Horror sign was funny.

We visited a little after 1 p.m. and it had just opened. The staff was friendly and completely relaxed. After they served us drinks, they played ping pong. I love that the pub has a ping pong table. Only two other patrons were present. Some people may be put off by the relaxed attitude of the bartenders. Personally, I don’t care. As long as they are available when I order my drink and are nice that’s all that matters to me.

I noticed a stage in the pub and I wonder how lively it gets on Friday and Saturday nights. We had just had breakfast so I didn’t order anything for lunch. However, the Jalapen’Oh! Shit burger with a beef burger patti stuffed with cream cheese and jalapenos did sound tasty. And just so you know, everything is served in paper bags. As I said, this is not a posh pub.

Overall, I liked this pub. It isn’t the cleanest place I’ve been too. Many of the leather couches have seen better days. But I liked the feel of it. If I lived closer I have a feeling I would go occasionally. I give the pub 3.5 stars our of 5.

TB Markinson is an American who's recently returned to the US after a seven-year stint in the UK and Ireland. When she isn't writing, she's traveling the world, watching sports on the telly, visiting pubs in New England, or reading. Not necessarily in that order. Her novels have hit Amazon bestseller lists for lesbian fiction and lesbian romance. She cohosts the Lesbians Who Write Podcast (lesbianswhowrite.com) with Clare Lydon. TB also runs I Heart Lesfic (iheartlesfic.com), a place for authors and fans of lesfic to come together to celebrate lesbian fiction.
View all posts by TBM →
This entry was posted in Weekly Pub and tagged East London, England, London, Mile End, Pub Review, Pubs, The Victoria, Victoria Park, Weekly Pub, Weekly Pub Review. Bookmark the permalink.

25 Responses to The Victoria Pub