Cover Reveal of Cloaked in Fur

I am super excited for today’s post. T. F. Walsh and I have been blogging buddies for over two years. Both of us would chat about books and the novels we were writing. And now we both publishing our own novels this summer. How cool is that! I’m thrilled and honored to be involved in showing all of you the cover of her first novel. 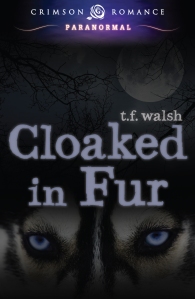 It will be released on August 5th.

As a moonwulf, Daciana never expected to fall in love with a human. Hell, she never imagined that she’d abandon her pack, endanger everyone around her, and break the worst rule possible. But she did.

A rogue werewolf is killing Daciana’s friends, and she sets on capturing the creature.  She’ll do whatever it takes to stop the beast. The police and her boyfriend, Inspector Connell Lonescu, are starting to question her involvement in the murders, which is endangering the pack’s secret existence. But when the pack alpha kidnaps Connell, revealing the awful truth about the creature and its connection to the pack, Daciana must choose between saving the man she loves and saving her pack family from certain death.

Allow me to introduce you to my wonderful blogging friend and author: 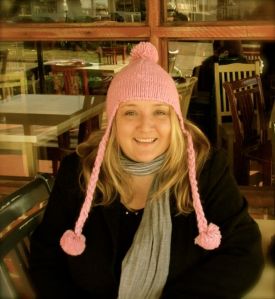 T.F. Walsh emigrated from Romania to Australia at the age of eight and now lives in a regional city south of Sydney with her husband. Growing up hearing dark fairytales, she’s always had a passion for reading and writing horror, paranormal romance, urban fantasy and young adult stories. She balances all the dark with light fluffy stuff like baking and traveling.

TB Markinson is an American who's recently returned to the US after a seven-year stint in the UK and Ireland. When she isn't writing, she's traveling the world, watching sports on the telly, visiting pubs in New England, or reading. Not necessarily in that order. Her novels have hit Amazon bestseller lists for lesbian fiction and lesbian romance. She cohosts the Lesbians Who Write Podcast (lesbianswhowrite.com) with Clare Lydon. TB also runs I Heart Lesfic (iheartlesfic.com), a place for authors and fans of lesfic to come together to celebrate lesbian fiction.
View all posts by TBM →
This entry was posted in Books and tagged Books, Cloaked in Fur, Cover Reveal, Crimson Romance, Goodreads, Paranormal Romance, T. F. Walsh. Bookmark the permalink.

30 Responses to Cover Reveal of Cloaked in Fur