The Sun in Splendour Pub

I meant to review this pub last May. But a camera mishap (I deleted all the photos) delayed the review. I had to find the time to go back and take new photos. Oh the hardship!

A few Saturdays we were in the area. It was hot out and I wanted a drink. And knowing I needed to get photos of The Sun in Splendour I suggested we pop in for a drink. This pub is located on Portobello Road. Did I mention it was a Saturday afternoon when the Portobello Market is in full swing? The pub was packed. However, this sign outside convinced me to try. 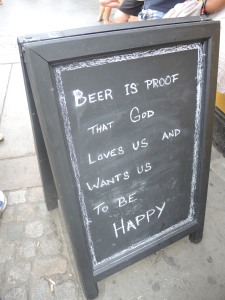 I actually have a t-shirt with this quote on it. In case you were wondering, Ben Franklin said it.

The Better Half found us a small table. I headed to the bar to place our orders. I can’t remember the beer TBH wanted, but the bartender poured the wrong one. I wasn’t aware of the situation until I placed the beer on the table and heard, “What beer is this?” I think the bartender overheard the question and realized he poured the wrong beer. The situation was corrected. Since it was so hot out, I guzzled my Pimm’s and lemonade. When I ordered my second Pimm’s and lemonade, which was a special on their summer cocktail board, the female bartender had no clue what I was talking about. I pointed to the board and she smiled and made my drink.

We tried tracking down the waiter to order some nachos. The poor man was in training and was completely overwhelmed. Again I went to the bar to order the nachos. They arrived promptly. They weren’t bad, but not great. The hustle and bustle of the place started to rattle my nerves. Some tourists were yelling at the food servers since their food was taking too long or they needed cutlery. I couldn’t take it anymore so we left. 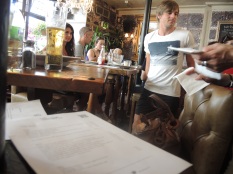 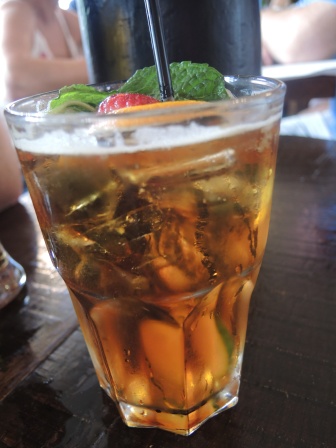 It is a shame I had to go back to review this pub, otherwise I would have given it 4 stars out of 5. Now I give it 2.5 stars and don’t recommend going on a Saturday. Especially on a warm Saturday.

TB Markinson is an American who's recently returned to the US after a seven-year stint in the UK and Ireland. When she isn't writing, she's traveling the world, watching sports on the telly, visiting pubs in New England, or reading. Not necessarily in that order. Her novels have hit Amazon bestseller lists for lesbian fiction and lesbian romance. She cohosts the Lesbians Who Write Podcast (lesbianswhowrite.com) with Clare Lydon. TB also runs I Heart Lesfic (iheartlesfic.com), a place for authors and fans of lesfic to come together to celebrate lesbian fiction.
View all posts by TBM →
This entry was posted in Pub of the Week and tagged England, Life, London, Photography, Photos, Pimms, Portobello Market, Portobello Road, Pub Reviews, Pubs, The Sun in Splendour Pub. Bookmark the permalink.

35 Responses to The Sun in Splendour Pub