A few weeks ago we went on a pub tour. Before the tour I wanted to eat something since I knew I would have a few beers along the way. And luckily The Better Half was able to leave work early. That rarely happens. Like almost never. So we went to the Mad Hatter Pub, on the south side of The Thames by the Blackfriars Bridge, to grab a bite to eat. This pub is part of a hotel. Even though it was Friday, we were able to get a table. Not only is the pub massive, but there weren’t a lot of customers. Odd since across the bridge another pub was packed. But hey, it worked out for us. It was nice and quiet and the service was excellent.

The Mad Hatter was originally a hat factory that made Bowler, Topper, and Boater hats for gentlemen. And many of you know the Mad Hatter in Lewis Carol’s Alice in Wonderland. It’s believed that back in the day, the glue used in the assembling of the hat rims contained Mercury, which caused some people so go a little mad. That originated the phrase “mad as a hatter.”

We took our seats at a table and a waitress came to take our order. In most pubs you have to order at the bar. We decided to share some Macaroni and Cheese. I hadn’t had some in such a long time. As for the beer, this is a Fuller’s pub, so I had a London Pride. It was wonderful to be able to relax and spend some time with TBH. And the fact that it was Friday at four in the afternoon made it even better.

Since we still had some time to kill before the tour, I ordered some dessert: a Lemon Tart with cream. I’m still getting used to cream with desserts. Being from the States I’m used to ice cream or chocolate sauce on the side, not cream. Slowly I’m becoming a fan. I will warn you, it’s very sweet. 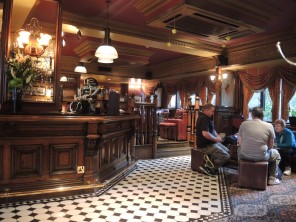 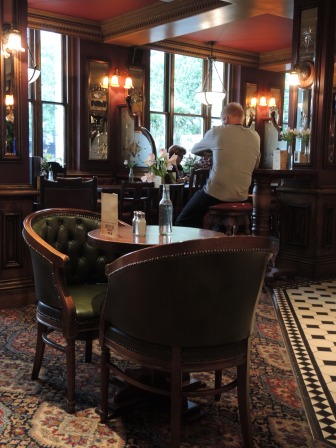 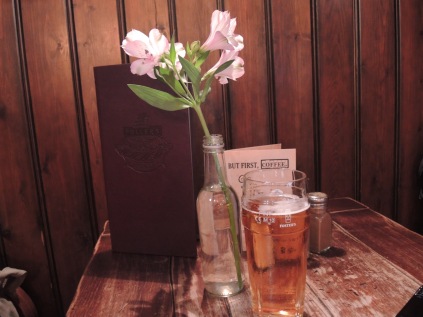 After relaxing and chatting we settled up our bill with the waiter, who was shy, but very attentive and made our way to the tour. All in all, I really liked this pub. It was wonderful to have a quiet place to eat on a Friday afternoon. Many of the pubs in the area are so packed customers are standing outside enjoying their booze. So if you are in the area and want a calm establishment I recommend this one. I give it 4 out of 5 stars.

TB Markinson is an American who's recently returned to the US after a seven-year stint in the UK and Ireland. When she isn't writing, she's traveling the world, watching sports on the telly, visiting pubs in New England, or reading. Not necessarily in that order. Her novels have hit Amazon bestseller lists for lesbian fiction and lesbian romance. She cohosts the Lesbians Who Write Podcast (lesbianswhowrite.com) with Clare Lydon. TB also runs I Heart Lesfic (iheartlesfic.com), a place for authors and fans of lesfic to come together to celebrate lesbian fiction.
View all posts by TBM →
This entry was posted in Pub of the Week and tagged Alice in Wonderland, Beer, Blackfriars Bridge, England, English History, Friday Nights, Fullers Brewery, Hat Factories, Lewis Carroll, Life, London, Photography, Photos, Pub Review, Pubs, The Mad Hatter, Tipple. Bookmark the permalink.

36 Responses to The Mad Hatter Pub