Before I begin, I want to apologize. I’m not avoiding your blogs. The Internet in our new place has been sketchy at best. I’m hoping it’s a temporary thing and not something I have to deal with on a daily basis. Someone will be here tomorrow from our provider and I have my fingers crossed that the matter will be resolved. I miss seeing what all of you are up to. If I can, I’m going to share a bit from our recent travels. Not sure I’ll be able to load the photos, but I’m going to give it a go.

While in Iceland we went on the Golden Circle tour, which included seeing Gullfoss, a waterfall located in the canyon of the Hvita river. It’s 105 ft tall (32 m) and has two drops. Any Echo and the Bunnymen fans out there? If so you might recognize this waterfall since it’s on their Porcupine album. It’s been a long time since I’ve listened to them. Might have to add them to my iPod when I have Internet again.

There are a few places where you can view the waterfall, including getting up close and personal. I will warn you, you’ll get wet if you follow one of the paths completely. It was a chilly and windy day when we visited. I ventured down the path knowing I would get wet, but when I reached the mist and the wind picked up I got wetter than I wanted and turned around before reaching the end. We still had two more stops on the trip and I didn’t want to be soaked, cold, and miserable the entire time. And I was worried about my camera. But if you want me to be totally honest, I was more concerned about me. I was already battling an illness and didn’t want to compound it. The Better Half was smarter and headed to the gift shop. And that’s where I headed to warm my bones before getting back on the bus for the next stop.

The view from above

Brave souls on a cold day. 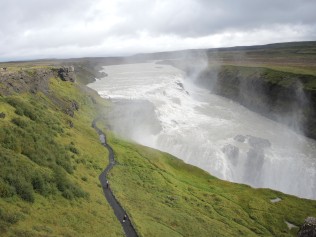