I really did try

Earlier this year I shared some photos of Rafael Nadal changing his shirt during a tennis match at the French Open. For those who aren’t familiar with Nadal, he’s extremely superstitious. Seriously you have to watch and see. After each set he changes his shirt. If you ever see him play live you’ll know when he’s doing it. Hundreds of people will start to whistle. After sharing photos from the French Open some bloggers requested more photos of a nearly naked Nadal. I promised I would do my best when I attended the US Open. We’ve been going to the Open for many years. Each year we get upgraded to better seats, which I love. Now for the bad news for those who wanted the naked pictures. This year our seats were behind the players so my view of Nadal changing his shirt wasn’t great. I tried, but I’m not sure it’s the same. I have my fingers crossed for better shirt-changing seats next year. 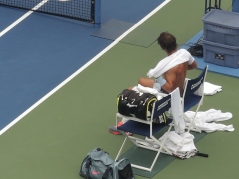 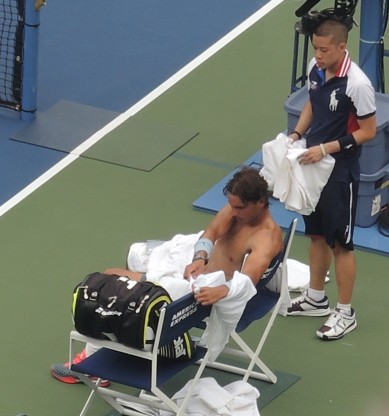 TB Markinson is an American who's recently returned to the US after a seven-year stint in the UK and Ireland. When she isn't writing, she's traveling the world, watching sports on the telly, visiting pubs in New England, or reading. Not necessarily in that order. Her novels have hit Amazon bestseller lists for lesbian fiction and lesbian romance. She cohosts the Lesbians Who Write Podcast (lesbianswhowrite.com) with Clare Lydon. TB also runs I Heart Lesfic (iheartlesfic.com), a place for authors and fans of lesfic to come together to celebrate lesbian fiction.
View all posts by TBM →
This entry was posted in Sports, Travel and tagged 50 Year Project, Flushing Meadows, New York City, Photography, Photos, Rafael Nadal, Tennis, Travel, Travel Blog, Travel Journal, Travel Photos, US Open. Bookmark the permalink.

62 Responses to I really did try