Review: The Woman in White by Wilkie Collins

Before I get to my review I would like mention that we survived the big storm that hit England, France, Belgium, Germany, the Netherlands, and Denmark.  Luckily for us, we didn’t experience any damage. Our boys were not happy about staying inside and no matter how hard I tried to convince them we were protecting them, they just gave me nasty looks.

Atticus just slept most of the time. 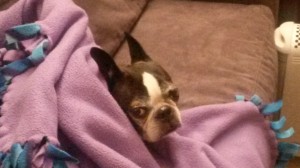 I’m pretty sure Miles is calling me a name that rhymes with witch.

Not everyone was fortunate and my thoughts are with the friends and family who lost loved ones and sustained damage to their homes.

Last year I read The Moonstone by Wilkie Collins. I loved it. Recently I read The Woman in White (published 1859), the fifth book by Collins and it’s considered an early example of detective fiction. Right from the start I was hooked. For those unfamiliar with the story, here’s the synopsis from Goodreads:

‘In one moment, every drop of blood in my body was brought to a stop… There, as if it had that moment sprung out of the earth, stood the figure of a solitary Woman, dressed from head to foot in white’

The Woman in White famously opens with Walter Hartright’s eerie encounter on a moonlit London road. Engaged as a drawing master to the beautiful Laura Fairlie, Walter becomes embroiled in the sinister intrigues of Sir Percival Glyde and his ‘charming’ friend Count Fosco, who has a taste for white mice, vanilla bonbons, and poison. Pursuing questions of identity and insanity along the paths and corridors of English country houses and the madhouse, The Woman in White is the first and most influential of the Victorian genre that combined Gothic horror with pyschological realism.

One of my favorite aspects of this detective story is that it’s told by multiple narrators. Each person adds another piece to the puzzle, yet Collins does not give everything away. Instead he built up the suspense, which forced me to stay up late several nights in a row in my quest to figure out the mystery. The book is long, over 600 pages, and not once did I find my mind wandering. His writing and his attention to detail kept me intrigued.

The story also adds insight into the restriction of women’s rights in Victorian England. In fact, those restrictions are the center of the mystery. His inclusion of this not only educates readers, but does so in a way that the reader doesn’t feel like Collins is preaching.

This mystery has it all: suspense, Gothic elements, delightfully creepy villains, strong character development, and there aren’t any dull moments. It’s on my 1001 list. The Observer rates this novel 23rd on their top 100 greatest novels of all time. Unfortunately, this is the last novel by Collins on the 1001 list. However, I will be reading more by him. I consider myself a fan now and if you are looking for a wonderful Victorian mystery novel, I highly recommend this book. This is the 84th book I’ve read from my 1001 list. I need to read six more before the end of the year to stay on track. Also this is my second contribution to Carl’s R.I.P. I didn’t read as much as I wanted to for this challenge, but there’s always next year.

TB Markinson is an American who's recently returned to the US after a seven-year stint in the UK and Ireland. When she isn't writing, she's traveling the world, watching sports on the telly, visiting pubs in New England, or reading. Not necessarily in that order. Her novels have hit Amazon bestseller lists for lesbian fiction and lesbian romance. She cohosts the Lesbians Who Write Podcast (lesbianswhowrite.com) with Clare Lydon. TB also runs I Heart Lesfic (iheartlesfic.com), a place for authors and fans of lesfic to come together to celebrate lesbian fiction.
View all posts by TBM →
This entry was posted in Book Reviews and tagged Gothic Novels, Mysteries, Photography, The Woman in White, Victorian Novels, Victorian Writers, Wilkie Collins. Bookmark the permalink.

38 Responses to Review: The Woman in White by Wilkie Collins