The White Lion of Mortimer Pub

A few weeks ago, on a Sunday, we wandered into The White Lion of Mortimer, a pub in Mitcham. For those who like more details, it’s located at 223 London Road. 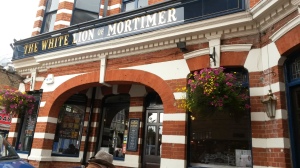 It was in the afternoon and I was famished. Looking around, I wasn’t sure if I wanted to risk ordering food at this pub. The surroundings weren’t all that impressive.

However, the back part of the pub had a lot of tables and all of them were full. And everyone was eating. That made me feel somewhat better so I ordered the Sunday roast. I should note that the meals at this pub are pretty cheap, which may account for the business. There were lots of beer choices, however I can’t remember what beer I had. I think The Better Half just ordered a couple of lagers—nothing too exciting.

Our food arrived and I was surprised. I won’t say that it wowed me, but it was average. And there was a lot of it. If I was in the area again, I would pop in if I was hungry. However, I doubt I would seek this place out with the intention of having food. Unless I wanted something cheap and decent.

Overall, I give the pub a solid three stars out of five. Nothing great about it, but I didn’t run screaming from the joint vowing I would never return.

They may want to fix their window, since right now it says J. D. Wether poo, not Wetherspoon. I got a kick out of that. You may have to click on it to read it. 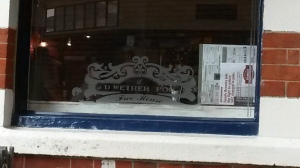 TB Markinson is an American who's recently returned to the US after a seven-year stint in the UK and Ireland. When she isn't writing, she's traveling the world, watching sports on the telly, visiting pubs in New England, or reading. Not necessarily in that order. Her novels have hit Amazon bestseller lists for lesbian fiction and lesbian romance. She cohosts the Lesbians Who Write Podcast (lesbianswhowrite.com) with Clare Lydon. TB also runs I Heart Lesfic (iheartlesfic.com), a place for authors and fans of lesfic to come together to celebrate lesbian fiction.
View all posts by TBM →
This entry was posted in Pub of the Week and tagged England, Mitcham, Pubs, Sunday Roast, Surrey, The White Lion of Mortimer Pub. Bookmark the permalink.

37 Responses to The White Lion of Mortimer Pub