As I mentioned last week, the next movie on the list was one I wasn’t looking forward to. Now, I love Elizabeth Taylor and I think she’s an amazing actress. My favorite movie of hers is Cat on a Hot Tin Roof. Taylor, Paul Newman, and Burl Ives are superb. But I’m not a big fan of people who scream a lot. I knew Who’s Afraid of Virginia Woolf? would be an uncomfortable viewing experience. The blurb from IMDb wasn’t encouraging:

A bitter aging couple with the help of alcohol, use a young couple to fuel anguish and emotional pain towards each other.

This is what my boys thought of the movie. 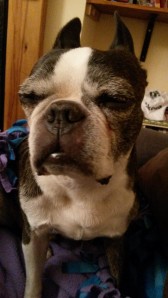 Miles couldn’t stand watching and had to keep his eyes closed.

That’s Att sitting on the toilet. I’ll let you interpret his thoughts.

Now I agree with Miles, it was difficult to watch. Let me start by saying what I liked about the film. The acting. You can’t talk about this movie without mentioning Taylor and Richard Burton. Both were sensational in this film. I thought since the film only has four characters I may get bored. But I didn’t and it helped tremendously that George Segal and Sandy Dennis were able to handle their own.

The writing is fantastic. This movie relies a lot on dialogue, and while I was cringing most of the time, I have to admit that the dialogue was spot on. George (Burton) and Martha (Taylor) say the most awful things to each other and in front of their guests. Seriously, I was uncomfortable when either of them started to speak.

This film is only the second film to receive Academy Award nominations in every available category. Just in case you were wondering, the other film is Cimarron. Elizabeth Taylor won for Best Actress and Sandy Dennis won for Supporting Actress. The male actors didn’t win and the movie didn’t take Best Picture.

It’s not an easy film to watch, just ask Miles. But if you can stomach it, I do recommend it. I know I won’t be watching it again anytime soon. I’m still traumatized. Up next is Raiders of the Lost Ark. Oh what a relief. A movie that’s fun and not emotionally draining.

TB Markinson is an American who's recently returned to the US after a seven-year stint in the UK and Ireland. When she isn't writing, she's traveling the world, watching sports on the telly, visiting pubs in New England, or reading. Not necessarily in that order. Her novels have hit Amazon bestseller lists for lesbian fiction and lesbian romance. She cohosts the Lesbians Who Write Podcast (lesbianswhowrite.com) with Clare Lydon. TB also runs I Heart Lesfic (iheartlesfic.com), a place for authors and fans of lesfic to come together to celebrate lesbian fiction.
View all posts by TBM →
This entry was posted in Movies and tagged AFI, American Film Institute, Elizabeth Taylor, George Segal, Movie Review, Movies, Photos, Richard Burton, Sandy Dennis, Who's Afraid of Virginia Woolf. Bookmark the permalink.