Recently the Better Half and I stumbled into The Furzedown Pub in Streatham, London. From the looks of the neighborhood, I wasn’t expecting much. This pub is on Mitcham Lane and many of the businesses have closed up shop. However, I was thirsty and feeling adventurous. And from the outside, the pub looked decent.

The first thing that struck me was the size. This pub is huge. 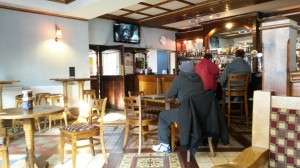 Second, I noticed they didn’t have a wide selection of beers. I settled for a Kronenbourg 1664. 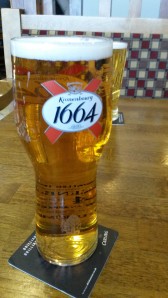 Sitting at a table I glanced at their menu and saw that their lunch specials included Saturdays.

Not the fanciest menu I’ve seen.

At first I wasn’t sure I wanted to risk ordering food at this pub. Then again, there weren’t many other options on Mitcham Lane so if I wanted to eat, this would have to do. I ordered the chicken Korma. The Better Half ordered hot wings.

For once, The Better Half ordered wrong. My meal was decent for 3.99. The hot wings were battered like fish and chips. It was weird. And THB doesn’t really like fish and chips to begin with so pretty much hated the hot wings. Feeling brave again, I opted to have a dessert. I thought I ordered carrot cake. It turned out to be a carrot dessert of some type, but not one that I had tried before. When the waitress set it down before me I didn’t want to touch it. It looked like cat puke with ice cream. She explained that it was a traditional meal, but I can’t remember from where now. After she left I gave TBH a look that said, “Should I even try it?” TBH shrugged. I was on my own.

I will admit that it was actually pretty tasty and I finished all of it. Still think it looks like cat puke.

When we arrived the pub was nearly empty. However, when a rugby game started, more people came in. It was a fun atmosphere and we ended up staying a lot longer than we intended. TBH ordered some cheesy fries and I have to say they are pretty darn good. Much better than the hot wings. Just the right amount of cheese and salt. But I forgot to take a photo. Let’s just say, they didn’t last long.

Now the next photo is pretty crappy. I’m always somewhat nervous when snapping photos in a pub full of drunk males. However I wanted to share this. If you look closely, the chap at the table is watching a movie on his laptop. I didn’t ask him, but I’m pretty sure he was watching Twelve Angry Men. I got a kick out of that. 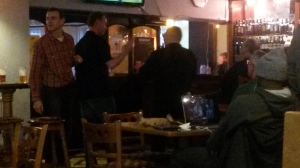 I give this pub 3 stars out of 5. Not the best place I’ve been, but not a total disappointment either. I don’t recommend the hot wings. And you may want to keep this in mind so you don’t get in trouble:

TB Markinson is an American who's recently returned to the US after a seven-year stint in the UK and Ireland. When she isn't writing, she's traveling the world, watching sports on the telly, visiting pubs in New England, or reading. Not necessarily in that order. Her novels have hit Amazon bestseller lists for lesbian fiction and lesbian romance. She cohosts the Lesbians Who Write Podcast (lesbianswhowrite.com) with Clare Lydon. TB also runs I Heart Lesfic (iheartlesfic.com), a place for authors and fans of lesfic to come together to celebrate lesbian fiction.
View all posts by TBM →
This entry was posted in Weekly Pub and tagged Beer, London, Pub, Pub Review, Streatham, The Furzedown Pub. Bookmark the permalink.

51 Responses to The Furzedown Pub