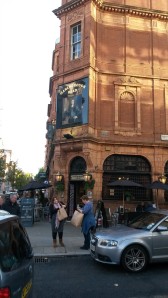 After visiting some friends in their flat and indulging in a wonderful Sunday brunch a few weeks ago we found ourselves wandering around Mayfair, London. Since we had just eaten a massive amount of food I wasn’t hungry, but we were both parched. So we hopped into the Marlborough Head. I didn’t know anything about the pub’s history until I did some research for this review. That’s a shame since I would have explored more looking for ghosts.

It’s believed that the pub was named after the Duke of Marlborough John Churchill. The area of Tyburn from the 12th century until 1783 was used for executions. More than likely, this spot was selected because it was surrounded by fields that could host a large crowd. Before the installation of permanent gallows, hangings took place in an area with a lot of sturdy trees. And hanging days were quite popular. People would gather and there would be food and drink stalls. During the centuries, thousands of people were either hanged or had their head chopped off. Then it was decided to move the gallows to Newgate. Okay, that’s enough morbid stuff for a Friday.

I didn’t know any of this when I visited. and I wouldn’t have guessed it since it’s in a fashionable part of London now. My impression of the pub was that it was crowded, but decent. I glanced at the menu and it serves typical pub food. Nothing fancy, but from other Taylor Walker pubs I’ve tried the food is okay and does the job.

We were able to find a small table with two seats. Near us there were two tables. One sat four people and the other sat three. One man sat at the larger table. Then a family of four came in. They didn’t speak much English, but they managed to ask the man if he would swap tables. He didn’t speak English either, but after some gesturing, the family of four got the man to move to the smaller table. Five minutes later, the man’s family showed up and now he had five people crammed around the smaller table. I observed and wondered if the family who moved the man would see the error of their ways and if they would swap tables with them. Not a chance. I know for a fact that they saw the man trying to seat his large family around the table since there was a lot of bumping of chairs, but the people who insisted on having the larger table did their best to ignore the man that they booted. They should be ashamed of themselves.

More people streamed in and since we weren’t hungry we decided to move on. Like I said, I wish I knew the history of this area before visiting this pub. I may have tried to enjoy it more. But to be honest, this pub didn’t impress me at all. I give it 3 stars out of 5.

Before I go, I wanted to announce that my first novel, A Woman Lost, is finally available in paperback. If you would like to know more about this process check out this post on my writing blog. If you always suspected that I was an idiot, this post will confirm it for you. Happy Friday!

TB Markinson is an American who's recently returned to the US after a seven-year stint in the UK and Ireland. When she isn't writing, she's traveling the world, watching sports on the telly, visiting pubs in New England, or reading. Not necessarily in that order. Her novels have hit Amazon bestseller lists for lesbian fiction and lesbian romance. She cohosts the Lesbians Who Write Podcast (lesbianswhowrite.com) with Clare Lydon. TB also runs I Heart Lesfic (iheartlesfic.com), a place for authors and fans of lesfic to come together to celebrate lesbian fiction.
View all posts by TBM →
This entry was posted in Pub of the Week and tagged Hangings, London History, Marlborough Head, Mayfair, Pubs, Tyburn. Bookmark the permalink.