Travel Photos of the Week: Colorado

This week’s inspiration for my travel photo collage is the Super Bowl. Yes, I know, the Broncos lost. Lost big time. We were so excited for the big game and made homemade salsa, grilled some steaks, and stayed up late on Sunday to watch, certain that Peyton Manning would lead the Broncos to a victory. Oh boy, were we wrong. For those who didn’t watch and haven’t heard, the Broncos were killed by the Seattle Seahawks: 43-8. Ouch!

Oh well, there’s always next year. Thinking of Colorado has made me a bit homesick. I lived in the colorful state for fifteen years. Unfortunately I don’t have many photos since I was broke for many of those years. I was able to dig up a few. Scroll over the photos for descriptions.

I miss the blue sky. 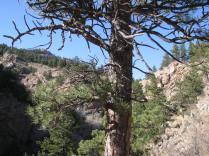 And I miss the trees

This fox isn’t scared of me one bit.

A ghost ad next to my favorite restaurant, Coopersmith’s in Fort Collins.

TB Markinson is an American who's recently returned to the US after a seven-year stint in the UK and Ireland. When she isn't writing, she's traveling the world, watching sports on the telly, visiting pubs in New England, or reading. Not necessarily in that order. Her novels have hit Amazon bestseller lists for lesbian fiction and lesbian romance. She cohosts the Lesbians Who Write Podcast (lesbianswhowrite.com) with Clare Lydon. TB also runs I Heart Lesfic (iheartlesfic.com), a place for authors and fans of lesfic to come together to celebrate lesbian fiction.
View all posts by TBM →
This entry was posted in Travel Photos and tagged Broncos, Colorado, Fat Tire, Fort Collins, Horsetooth Mountain Park, Old Town Fort Collins, Peyton Manning, Super Bowl, Travel Photos. Bookmark the permalink.

36 Responses to Travel Photos of the Week: Colorado