Last weekend we celebrated The Better Half’s birthday. To kick off the festivities, we headed to Red Dog Saloon located on Hoxton Square. They serve American BBQ. TBH picked out the joint and I was super excited until the day before. Someone from the restaurant called to confirm our reservation and informed me that our reservation was from 2 p.m. to 3:30 p.m. I didn’t like how she implied we had to be out of the place by half past three.

Here’s the dilemma. TBH is the slowest eater in the world. I used to think my grandfather was the slowest until I met TBH. One and half hours may sound like a reasonable time for most people to enjoy lunch, but I knew since we were celebrating we’d order appetizers, a main course, and dessert. And let’s not forget drinks.

To say I was worried is an understatement. I mentioned to TBH that we had a deadline. TBH instantly said, “Cancel the reservation.” It was a tempting thought, but then I remembered that this was a place TBH had mentioned on several occasions. So we went. I was preparing myself for a stern talk with the manager. No one was going to kick us out on TBH’s birthday.

I have to say the entire staff was friendly. We didn’t have one particular waiter. At one point I counted and determined five different people, give or take one or two, made sure we had everything we needed. The food was pretty good. The only thing I didn’t like was the pecan pie. Luckily TBH ordered Mississippi Mud pie and that saved the day.

This place was hopping as soon as we walked in. However, by the time the main course arrived, it was only half full. That put me at ease. We didn’t leave until a quarter to five. I told you, TBH is the slowest eater ever. Below you’ll find some photos of the place and the food. If you are in London and would like to sample some American BBQ give it a go. 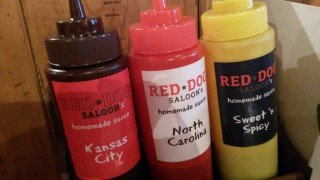 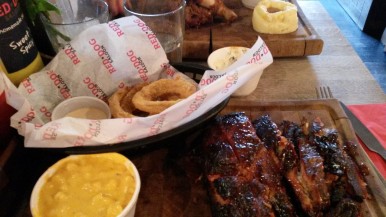 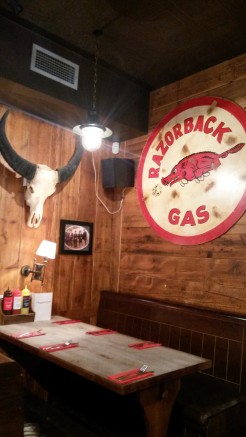 TB Markinson is an American who's recently returned to the US after a seven-year stint in the UK and Ireland. When she isn't writing, she's traveling the world, watching sports on the telly, visiting pubs in New England, or reading. Not necessarily in that order. Her novels have hit Amazon bestseller lists for lesbian fiction and lesbian romance. She cohosts the Lesbians Who Write Podcast (lesbianswhowrite.com) with Clare Lydon. TB also runs I Heart Lesfic (iheartlesfic.com), a place for authors and fans of lesfic to come together to celebrate lesbian fiction.
View all posts by TBM →
This entry was posted in Restaurants and tagged American BBQ, Hoxton Square, London Restaurants, Red Dog Saloon. Bookmark the permalink.

59 Responses to The Red Dog Saloon: American BBQ in London