The Manor Bar and Grill

Recently we stumbled upon The Manor Bar and Grill on Tooting High Street. Prepare yourself for a really awful photo. The front looks much more inviting than my photo shows. 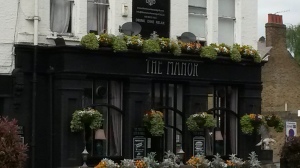 We didn’t plan on hopping into a pub that day, but when I spied it, I decided, why not. It was a Friday afternoon and the place was nearly empty. That didn’t bother us one bit.

Before we left our flat, I had lunch, but like I’ve said before, I’m usually hungry. So I ordered the lightly crisp chilli squid and some skinny fries. The squid was delicious and fresh. The fries were tasty. It was a somewhat warm day so I enjoyed a cider with my snack. 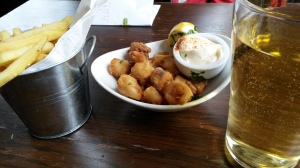 Before leaving I noticed that they had desserts. When I pointed to the chocolate fondant with vanilla ice cream the better half didn’t say anything and went to the bar and ordered another round of drinks and my dessert. 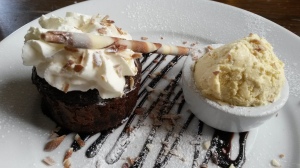 The other day, we were in the same neighborhood and we popped into The Manor again. This time I sampled the Rebellion IPA crafted by The Marlow Brewery, but skipped having food. Not sure why, but I think I had a reason. The IPA had a nutty and fruit flavor and to be honest, went down easily. I was expecting it to have a stronger hoppy taste and was glad it didn’t. Here comes another horrible photo. 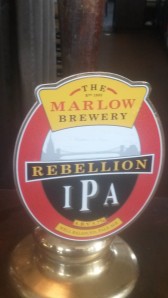 Each time we’ve been there, we’ve enjoyed the laid-back atmosphere. We haven’t been there in the evenings so I’m not sure how crowded it gets. If you’re in the area during the afternoon, I highly recommend it. And the chocolate fondant was pretty darn good.

We have an extremely busy weekend planned so the chances of us finding a new pub this weekend is pretty much nil. Oh well, I have a few more I haven’t reviewed yet. Have a marvelous weekend. See you next week.

TB Markinson is an American who's recently returned to the US after a seven-year stint in the UK and Ireland. When she isn't writing, she's traveling the world, watching sports on the telly, visiting pubs in New England, or reading. Not necessarily in that order. Her novels have hit Amazon bestseller lists for lesbian fiction and lesbian romance. She cohosts the Lesbians Who Write Podcast (lesbianswhowrite.com) with Clare Lydon. TB also runs I Heart Lesfic (iheartlesfic.com), a place for authors and fans of lesfic to come together to celebrate lesbian fiction.
View all posts by TBM →
This entry was posted in Pub of the Week and tagged Pub Review, Rebellion IPA, The Manor Bar and Grill, The Marlow Brewery, Tooting. Bookmark the permalink.

35 Responses to The Manor Bar and Grill