Sometimes You Just Need A Break

And beer. The Better Half and I have been working long hours. So far, 2015, has been all work and not much fun. That was until last week. TBH had a chance to leave the office early and called to ask if I could play hooky. I jumped at the chance.

Our plan was to visit some pubs. First up was The Butchers Hook and Cleaver (love the name) . This is a massive pub. The staff was friendly and we split some fries and onion rings that were quite tasty. It’s not a cozy place, but it would be great for a work function. 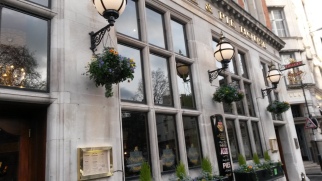 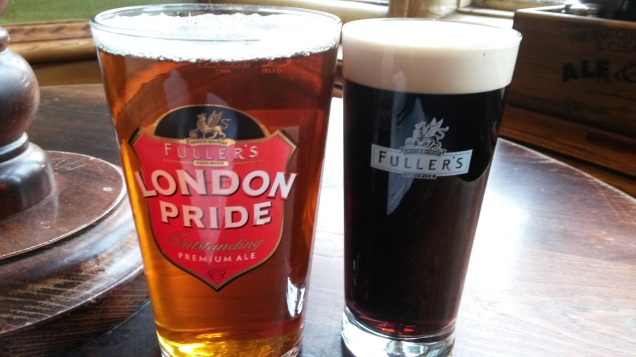 Next up was the Fox and Anchor pub. This is more like the pubs I’m used to: dark, quiet, and quaint. Again the staff was friendly and since it was a cold afternoon, I appreciated how warm it was inside. Both of us commented right away that it felt nice to be warm.

And finally we ended up at The Smithfield Tavern . Now this is the type of place that both of us like. The leather couches were inviting. The staff was so laid back I hardly noticed them. And the beer was tasty. I can’t remember the name of the beer I sampled since the photo didn’t turn out. Anyone know?

The only problem was the temperature. I don’t think they had the heat on and the front door didn’t close properly. Halfway through my beer I gave TBH the look, the one that says, “We need to go.” And we did. Maybe I’ll go back when it’s warmer outside since I did like the feel, but I had zero desire to sit inside and freeze my but off.

Afterwards we went to sushi for dinner. All in all, it was a wonderful afternoon out and it was so nice to have some time together.

I wanted to post this last week, but my laptop decided to crash. It was a scary day since being an idiot, I didn’t have all of my files backed up, including two novels I’m working on. Luckily I was able to coax the laptop back to life and I saved everything I needed. I’m not sure how much longer my laptop will last since it’s dying a slow and painful death. My hope is that it lasts till late spring. If you don’t hear from me, that may be the reason. Or I may be at the pub.

TB Markinson is an American who's recently returned to the US after a seven-year stint in the UK and Ireland. When she isn't writing, she's traveling the world, watching sports on the telly, visiting pubs in New England, or reading. Not necessarily in that order. Her novels have hit Amazon bestseller lists for lesbian fiction and lesbian romance. She cohosts the Lesbians Who Write Podcast (lesbianswhowrite.com) with Clare Lydon. TB also runs I Heart Lesfic (iheartlesfic.com), a place for authors and fans of lesfic to come together to celebrate lesbian fiction.
View all posts by TBM →
This entry was posted in Life, Pub of the Week and tagged Laptops, London, Pubs. Bookmark the permalink.

34 Responses to Sometimes You Just Need A Break